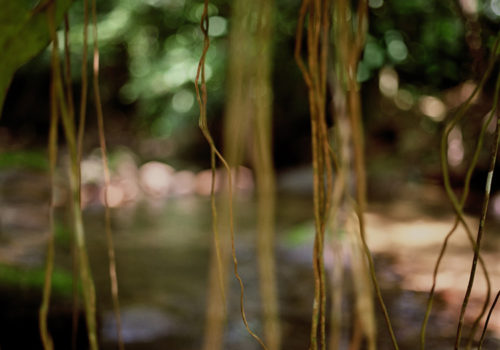 “Naked, Nude or Naturalist” was the theme around Mona Kuhn when I first met her several years ago. It was around that time Kuhn was nominated for the 2006 Prix Photographique BMW—ParisPhoto Award, just after her first photobook, ”Mona Kuhn: Photographs”, was published by Steidl (2004) and just before her second Steidl monograph ”Evidence” (2007) came on the scene.
Recognized as “one of the important new voices in contemporary photography” Kuhn’s large scale color images had a dreamlike quality. Her impressionist styled nudes, seemed effortless, creating the effect of people naked, but comfortable in their own skins. I wanted to find out more about this young photographers’s point of view and how she arrived at creating these stirring images. I was intrigued by Mona’s background and her warm, inviting demeanor. Born in São Paulo, Brazil in 1969, of German descent, educated in the United States at Ohio State University, and was an independent studies scholar at the Getty Research Institute in L.A. She spent her summers in a French naturist colony and the subjects in her photographs were of friends she developed a trust with over the years there. In 2008, she returned to Brazil for the first time in twenty years. This portfolio of work, Native, is the result.

MONA KUHN’s NATIVE
“My previous body of work (Photographs, Steidl 2004 and Evidence, Steidl 2007) was all done in France through the summers in a naturist community—I wanted to photograph the nude, I wanted it to be an authentic experience and when I found out about this place I felt very comfortable and very, in a way, also protected and welcomed to a place where people were already in the nude. Even though I am very outgoing, I also have a shy side to me, and one of the things I don’t like is to ask someone to get naked because I’m not really interested in them being naked, I’m more interested in the body as a residence of who we are.

I went from there to my home country in Brazil—I hadn’t been back for twenty years. I didn’t want to be in a naturist colony in Brazil. I wanted to photograph people; I wanted to find a thread of how to continue my language that I had started with the work previously. How I continue that, but in a different environment that would be challenging for me with a different kind of palette—a different view into the subject.

I went to Brazil during 2008 for three times—each time for about two months. The first time was me going into the forest photographing, re-analyzing what does Brazil mean to me, what does the temperature, the way people talk to each other, the street life, the sounds, the smells, the noise of the birds if you go into the forest—everything is just so overwhelming and it reminds you of so many experiences, some good, some bad. It’s this love-hate relationship of going back home.

My home is not in the forest, but this whole idea you are working with art, you abstract a little bit those ideas. So, I went back and stayed two months in the forest in a little hut in the rain coast. The rainforest that everyone knows about is in the Amazon, which is on the west side of Brazil, but it extends all the way down along the coast and it is called the coastal rainforest. That is where I went.

At the end of the first trip, I met the boy, Leo. [Emerging Boy, 2009]. I was going down the river photographing things—at the time I was just thinking I want to do something different than before, so it was basically landscapes. I was inside the water. I saw him over there and at first I was like—who is this? You see this foliage moving, you see people showing up and I wasn’t in an indigenous area it was just the forest, but you just get nervous, is it an animal, is it a person, is it a criminal? And it turns out that it was Leo with his brother and they looked at me and they got scared. We all got scared. I moved away from them and so they came out a little bit further, closer to the river and I moved further away from them because it is all body language. When you are in the forest your instincts are a little bit more heightened. His brother was bigger than him and eventually I realized that he is unraveling this swing from one of the trees. This is the place where he wanted, with his brother, to swing and jump into the center of this natural pool. When I saw him doing this I said, why am I going away from him, I have to go back. As I was leaving— he said—Wait! And I turned around and he got into the swing. And he was like this—hanging—and I said—wait, stay there! Stay there! And I’m going against the water. And that image, to me, means a lot because he gave the image to me. That moment was his moment. In the first trip he was the first person that I photographed.

There was an apartment that wasn’t open for 25 years—it had maybe two rooms and a living room and a kitchen. Nothing in the apartment was touched for 25 years—there’s still the socks hanging, drying in the laundry room, the bed was still unfolded, you know, someone walked out. It was un-believable. But the important part for me in this place was that the walls were the palette that I wanted to work with. In the back of my mind I said, in a perfect world, I grew up with three colors that made a lot of sense for me and I wanted to have those colors in this new body of work—and it was green, yellow and a little bit of pinks. And as we entered the apartment we had those beautiful things that show time—there was a painting on the wall, but now it is not and you see the dust around it. It was filled with those moments throughout the apartment—there was a very old, golden, almost rotten—already eaten up—curtain that looked like the very colonial, European-influence.
I like natural light—I like being with the people, being close with them. Even sometime the tripod bothers me. I want them to forget that I have a camera with me so most of the time I am just handholding the Hasselblad…if I have to put the tripod I get a little annoyed, but I don’t let them know. But bringing light and assistants is definitely a no-no because then you don’t have the intimacy. All of that disappears with the whole production thing.

Doppelganger, 2009 for me is really interesting because it’s a standing figure with a reflection of the standing figure in the mirror together with a refection of the shadow. So in terms of having almost simulacra—it’s almost like trying to go to your past, but not being able to reach it because it became memory and it became a memory of a memory. A lot of times I am looking around in the area and seeing things that are happening naturally. And I might say—this is great, your position—stay there. And then I go, because it was a reflection, so I’m trying to position myself away from the mirror. And I might say, just don’t do anything…move the hand a little forward… the other hand is a little odd, make it disappear behind you. I might fine tune a little bit, but I try to use each person’s own body language. So I might fine tune just so it fits on the frame, but I try, at first, just looking at their own positioning…or I pretend that I’m not paying attention and I look away…let’s have a glass of water and I come back and suddenly—naturally—they are already in another position that I am able to direct as well, because they know themselves the best. It’s psychology. For me, nudes there is a lot of psychology involved… a lot of respect for each other, trying to work, but not overly…

Marina on White, 2009 —first I met this boy who is sitting in the back there…Ian is his name and Ian said—I want to introduce you to my bride. I went to the Amazon, I was on vacation with my guy friends and I was just not thinking about anything, I just wanted to have a vacation from work and suddenly I ran into this woman and immediately fell in love with her. And she had fallen in love with him too. When I photographed them it was the first month that they were living in Sao Paulo and she was amazing. She is on the cover of the book because she has this incredible, very natural beauty, but also you can tell that she is just so new into the situation…at the same time a little careful…something that I cannot really quite touch. I think it is precious. We spent two days together and photographed mornings and afternoons and night. They were so amazing I could just do a whole body with just them. I called from Germany and said—Marina, you are going to be on the cover. She just came to Sao Paulo and now she is naked with her newlywed on the cover of this book. It is incredible and I am very fortunate to suddenly expose myself to a situation where I also didn’t know where it was going. But in this unknown territory suddenly all these beautiful things and all these unpredictable things start coming in together.”
Elizabeth Avedon