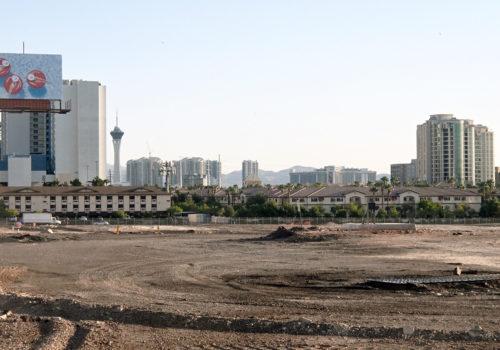 At the very end of the 1980s, during my studies in architecture, I found out the existence of an essential book in the history of architecture, published in 1972 – « Learning from Las Vegas ».

If today it constitutes a classic of architectural and urban theories, for nearly twenty years it was the subject of unprecedented controversy, provoking criticism and passionate positions.

When I first saw the photo of Denise Scott Brown, taken in 1966, in the Nevada desert, with the Strip (of Las Vegas) in the background, I was immediately fascinated. Taken by Robert Venturi, it dates from the period when, together with their students, they were working on what was to become a manifesto having a major influence on the emergence of postmodernism in architecture.

In a few days, between October 27 and 30, 2022, The Neon Museum will celebrate the fiftieth anniversary of this book. This same image of Denise Scott Brown, appears on the poster of the exhibition Wayward Eye which will show for this occasion her photographs taken between 1956 and 1966, in Las Vegas.

“Las Vegas is built for the car, with a linear development along a main axis connecting the airport to the center (…) This is why, to carry out this analysis, Robert Venturi, Denise Scott Brown and their students drove around the city of Las Vegas, from where they filmed and photographed their entire journey.”

In 2015, the Arles festival honored these same photographic archives of Venturi and Scott Brown, presenting a large part of the original photos used for the book.

Robert Venturi died Tuesday, September 18, 2018, at the age of 93, at his home in Philadelphia. He had, said his son, James Venturi, Alzheimer’s disease. Architect, Pritzker Prize in 1991, Robert Venturi was above all this iconoclastic and visionary theoretician who, with his wife, partner and unfailing accomplice Denise Scott Brown, propelled his discipline into the new era of postmodernity.

The photos in this series are part of a larger subject including my photos taken between 2002 and 2022, during my four trips to Las Vegas. The few photos chosen here were all taken in August 2022, from the south of the Strip, by car; most of them have the hotel-casinos of the Strip in the background and in the foreground the new construction sites that continue to nibble away at the desert.