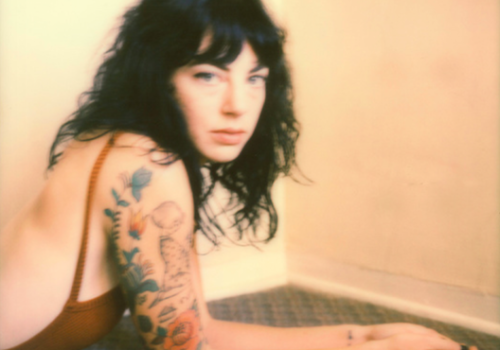 Presented for the first time in France, Shelbie Dimond’s work is a series of portraits in which she is her own model or has young women pose for her.

The story of this American photographer born into a community of Jehovah’s Witnesses, in which she was raised until her teens, is a surprising one. At the age of fifteen, Shelbie rebelled against this protective cult that reinforced  the influence of her family, who had taken her out of school. Totally isolated from the outside world, Shelbie turned to photography and started to document her imaginary world with the help of her Canon A-1 with which she photographed the night sky. Her experiments progressing, and with few available subjects, Shelbie turned the camera on herself and began taking self-portraits.

At eighteen, she fled the community to live in San Francisco, where, faced with the disapproval of other Jehovah’s Witnesses and knowing no one outside their circle, she lived in her car in a parking lot, photographing the world around her, and weaving, little by little, links with an unknown, outside world. Rejected by her family, Shelbie experienced moments of great depression, as well as a period of adaptation. She discovered that the apocalypse was not around the corner, that her decisions and choices would not lead to her immediate downfall. It was a painful and irreversible liberation. Always armed with her camera, today a polaroid, she documents the carelessness found at the end of the world.

Behind the power of self-portrait and female body, her images express a great sincerity and a direct connection with the photographic process itself. Spotted thanks to her prolific work in analogue snapshots, Shelbie Dimond has been supported in her work by Impossible Project for many years and is being exhibited in their Paris space for the first time.