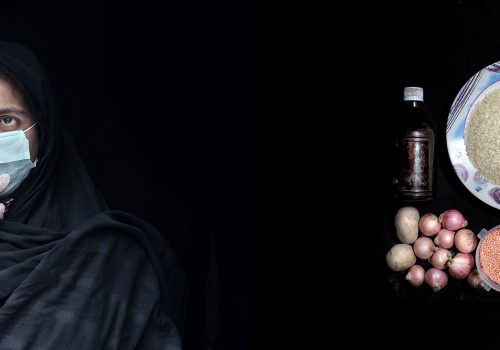 The world is at risk of widespread famines caused by the coronavirus pandemic. The impact of global economic devastation caused by Covid-19 has already declared as the worst humanitarian catastrophe since the Second World War. The number suffering from hunger could go from 135 million to more than 250 million. For Bangladesh it has become a human and food crisis catastrophe both.

House maid Hamida Begum who is now out of work said, “We only have forty Taka (Less than US fifty cents) at home. We have to drink poison, if we cannot go out for work. Who will save us from hunger?” The sufferings of approximately 7 million slum dwellers around Dhaka city are multiplying due to fall in income and price hike of consumer goods. There is hardly any food supply left in low income people’s houses, let alone ensuring cleanliness.

Most slum dwellers living in different parts of the capital no longer worrying about the virus and its infection but what worries them is hunger as they cannot go out for work. Their empty food storage and remaining little food supply can not save them from starvation and hunger in coming days.

Since March 26th Bangladesh Government announced the lockdown. Still we are living under lockdown. Isolation is an impossible word for a city like Dhaka which has over 25 million population. Every year, 500,000 people move to the city in search of economic opportunities and a stable life. Dhaka has a migrant population the size of El Salvador, but it is 80 times smaller.

Majority of the slumdwellers are climate migrants. And a great number of families are led by women. Main income for women is working as house maid and textile work. As the slum is located near affluent neighborhood women living in slum easily get job as house maid and can earn around 5000 Taka to 8000 Taka. Before lockdown they all were earning their living. But due to lock down a great number of women lost their job and passing days without food or little food. Men usually work as rickshaw driver or van driver.

Women are more affected by hunger than men because women cannot at all do out in this situation. Men still can manage and do a little work even though the lock down continues. But women are more vulnerable and prone to fall into sickness. Majority of the household work are done by women and they can never save anything for themselves. Also, a good number of women living in slums are single mother or they had run away from abusive husbands. In this hunger pandemic slum dwellers women are suffering miserably. Also, women have a tendency to feed their children and husband first. Thus, whatever remaining food a household might have a mother is the last person who will have it due to socio-cultural reason.

37 years old Hamida Begum works as house maid. She and her daily laborer husband both are now jobless. The little food supply they have now won’t last in their five members family. Hamida Begum said, “We only have forty taka now. We have to drink poison, if we cannot go out for work. Who will save us from hunger?” Dhaka, Bangladesh © Mohammad Rakibul Hasan

30-years old Kulsum Begum is struggling with her three children since her husband died last year. After lock down she is staying at home and lost her housemaid job. Only food her family has is insufficient to run a few days. She has no one in the city that can help her to survive. Dhaka, Bangladesh © Mohammad Rakibul Hasan

35 years old Shipli Rani Shiuli lost her job after Government announced lockdown in Bangladesh. She is the sole breadwinner and takes care of her two sons since her husband left her. She has little groceries that will last for maximum two days now. With no income she has no idea how she will be able to manage food for coming days. Dhaka, Bangladesh © Mohammad Rakibul Hasan

Textile worker Helena Begum (35) lost her job as her factory layoff last month. She along her five years old daughter Shakiba and elderly mother are now staying half feed almost every day. Helena’s husband left the family after she gave birth to a daughter. She has no one to help her with loan or temporary aid. Dhaka, Bangladesh © Mohammad Rakibul Hasan

Aklima (35) is standing with her one and half year-old daughter Suborna in their one bed-room slum house. She sends her three children in the village as they are unable to manage food for the family now. Every morning she along her rickshaw pullar husband and child only drinking water. With little food left she can only cook once a day. Dhaka, Bangladesh © Mohammad Rakibul Hasan

Firoza Begum (50) has been working as house maid for last thirty years. This is first time due to lock down she is unable to work. Her two sons lost their job recently. Like other slum dwellers she and her family are struggling for daily food supply. Firoza with her two grandchildren Fahima (left) and Selina (right) are feeling uncertain about their future. She doesn’t know when they will be able to eat trice a day again. Dhaka, Bangladesh © Mohammad Rakibul Hasan

House maid Kohinoor Begum and her security guard husband Abul Kashem both are now staying at home. Due to lockdown Kohinoor lost her job. The only house they had in their village went in river. During their three years stay in Dhaka they never face such poverty and hardship before. With little food supply and thirty-taka cash their five members family fear to starve in coming days. Dhaka, Bangladesh © Mohammad Rakibul Hasan

40-years old Anowara Begum works as house maid. She and her rickshaw pullar husband can no longer work due to lock down. They along their three children are eating once a day to save their remaining grocery. She calls her previous employer for help with food aid. If lock down continues, she fears her family will be in the street to beg or to die. Dhaka, Bangladesh © Mohammad Rakibul Hasan

Sahara Khatun’s (60) only son works in a hospital as peon. He stops going to work since the hospital is lock down for virus outbreak. Now Sahara with her disable husband is spending days of uncertainty and starvation. The little food supplies the family possess will run a day or two. Dhaka, Bangladesh © Mohammad Rakibul Hasan

House maid Kulsum Begum (38) fears for her daughter Runa’s (15) safety under lock down. She is looking for food aid since the day her employer dismissed her job. As a single parent she is unable to provide enough and now both mother and daughter are almost starving daily basis. Dhaka, Bangladesh © Mohammad Rakibul Hasan

Siuli Begum (22) survived an abusive marriage and moved to Dhaka with her son Mehedi (3). House maid Siuli is no longer continuing her work due to lock down. At present she has almost no food supply to eat at next day. When her child cries for food she gives him biscuit as there is little rice left in the house. Dhaka, Bangladesh © Mohammad Rakibul Hasan

Khadiza Begum (38) is carrying her daughter Sumaiya (2). She along her husband sells pickle in the street. After lock down they are not able to go out in the street. As soon as they are out of income, they are now left without food supply. After paying 4000-taka house rent they now have no money left to buy daily grocery or food supply. Dhaka, Bangladesh © Mohammad Rakibul Hasan