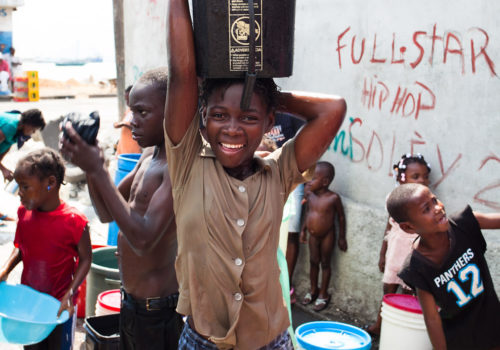 In January 12, 2010, a catastrophic earthquake hit Haiti, one of the poorest and least developed counties in the world. An estimated two million people were affected by the disaster, which reduced much of the capital, Port-au-Prince, to rubble. According to the International Organization for Migration, some 634,000 people remain living in displacement camps, on this, the second anniversary of the quake.

Gallery’s photographs were published in Tent Life: Haiti, a monograph released by Umbrage Editions in Spring 2011. The first edition sold out just months after release. Now in its second printing, 100% of the royalties from the book continue to be donated to Healing Haiti, J/P HRO, and The Global Syndicate/Ciné Institute. Photographs from Tent Life: Haiti are currently on display in Moving Walls 19, now through October 31, 2012.

Following the quake, Haiti was a land of displaced lives, with hundreds of thousands living in the most basic conditions. Yet despite having everything taken away from them in the most brutal way possible, the Haitians are nothing if not resilient in the face of all obstacles. “Pito nou lèd, nou la,” says the Haitian proverb. “Better that we are ugly, but we are here.”

Daily life in these tent cities is a struggle against the elements—natural and manmade, physical and psychological. As Edwidge Danticat writes in the book’s introduction, “Tent life is not to be idealized though. It is indeed about misery and pain. It is about standing up when it’s raining because the floor where you are sleeping becomes a pile of mud. It is about lightning strikes that kill babies, fires that catch on all-too-quickly. It is about extreme vulnerability for women and girls, all-too-common rapes. It is about lack of privacy, jobs, food, clean water, sanitation, and waste disposal. It’s about the grave menace of spreading cholera and other infectious diseases. But it is also about what Haiti has always offered: spontaneous and lasting community as well as cooperation. It is about people looking after one another in extremely difficult times, sharing what little they have. It is about love, dignity, resilience, and, yes, hope.”

Gallery’s photographs are a testament to this—the beauty of the human spirit that glows from within. His photographs show us that despite the worst possible circumstances, the people of Haiti have something so many of us lack: the commitment to family, to community, to rising above. Can’t hold us down, not by the forces of Man nor Nature.

The photographs are at quietly shocking, such beautifully composed images of honor and pride in the face of total devastation. As Gallery explains, “There have been 1.5 million people living in tents or tarp shelters since the earthquake and I feel it’s important that we see inside of their living conditions and feel what it would be like if we lost everything we own. What surprised me the most was their ability to smile and laugh within these heartbreaking conditions. It made me think, ‘If they can stay positive and keep smiling through this, then I have no excuse not to do the same in my life.’ I was continually saddened by the living conditions in Port-au-Prince but constantly moved and inspired by the spirit of the Haitian people as they remained resilient and hopeful.”

He continues, “Besides the spirit of the people of Haiti through this tragedy and loss, what has really inspired me are the many Americans I met in Haiti who took it upon themselves to move to Haiti and do something. When I say something, what I mean is that they didn’t always know what they would do before they arrived in Haiti. They just knew they had to go and do something! I met many people in their late 20s who have started their own non-profit grassroots organizations in Haiti and are making a HUGE difference for that specific community. These people inspire me to do more because they have devoted their lives to just giving to the people of Haiti in whatever way they can. They speak to the communities directly and ask what does the community need, then they go make it happen while involving the community.”

While much of the mainstream media has moved on, it is refreshing to see people like Oprah Winfrey and Sean Penn remain committed to drawing attention to and providing support for the people of Haiti today. With their support, as well as that of Moving Walls and the publication of Tent Life: Haiti, we keep in mind that just because the headlines are no longer screaming does not mean the pain and the problems have gone away.

As Gallery notes, “Haiti still deserves our help and there are small things we can do to keep the information spreading. Using Facebook or Twitter to repost other people’s stories about Haiti can make a difference. Or give $20 to an organization you trust. You will feel happy to give and you won’t miss the $20. When you purchase Tent Life: Haiti for $40 from Umbragebooks.com, we donate $20 to our organizations in Haiti.”

(Translation: “You can cut me off, uproot me, toss me away. You can roll me, burn me to cinders but birds won’t quit nesting in my roots and hope doesn’t wither but instead blossoms in me.”)