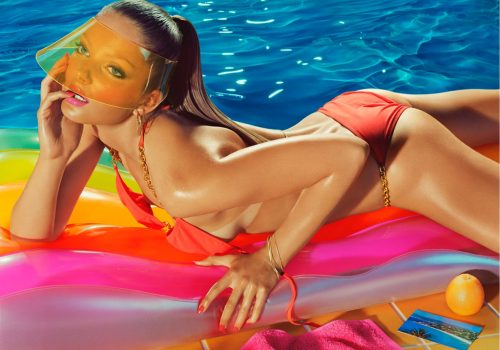 ‘I think that a fictional mise-en-scène can be more truthful than documenting reality, especially in an age of fake news.’

Christophe Guye Galerie presents a new exhibition of works by British photographer and artist Miles Aldridge, entitled Screenprints, Polaroids and Drawings. The exhibition focuses on the artists’ recent exploration of the medium of screenprinting as a new way of depicting his photographic images. Aldridge’s hyper-coloured work is well known for its cinematic depictions of the strange and surreal in modern life. In this exhibition, Aldridge’s vernacular of noir beauty is further emphasized through the screenprinting process, which allows a new heightened colour, as well as a print texture nostalgically reminiscent of pin-up magazines and pulp fiction book covers.

Born in London in 1964, Aldridge studied at Central St. Martins School of Art before coming to Photography. His work has appeared in museum and gallery exhibitions worldwide including in 2013 a retrospective at Somerset House in London. In 2014 he was invited by Tate Britain to create a photographic installation as a response to Mark Gertler’s 1916 painting, Merry-go-Round. He has works in the permanent collections of multiple institutions including The British Museum, The National Portrait Gallery and The Victoria and Albert Museum in London, the Foundation Carmignac and the Palais Galliera Musee de la Mode de la Ville de Paris and the International Centre of Photography in New York.

One of the series featured in the exhibition, (after Miller), sees Aldridge’s response to the work of painter Harland Miller, appropriating his well-known penguin book cover paintings within his own pinup scenes, thus creating a tandem of personalities which comment on the social psyche of growing up in the 1960s and 1970s.

Through the inclusion of Aldridge’s preparatory drawings and Polaroids in the exhibition, the developmental process is laid bare, exemplifying the parallels in narrative from the initial conception of the idea to the final artwork. As art critic Michael Bracewell comments on Aldridge: ‘In his work, the tension of film noir conflates with Pop and post-Pop vibrancy; what could be tableaux of science fictional erotica mingle with a hyper- stylized account of domestic British vernacular; the visual language of a mid-twentieth century centrefold pin- up articulates icily depersonalized desire.’

A focal point of the exhibition will be a new large-scale screenprint, entitled Tan Lines, which will be shown for the first time before being presented at New York’s Armory Show in March. The scale of this print makes it Aldridge’s most ambitious screenprint to date and as with many of the works on show continues his fascination with subverting Hollywood and European cinema’s depiction of the female protagonists to darkly domestic scenes of modern despair, creating images with irony and multilayered intrigue.

Aldridge proposes: ‘Nowadays anybody can take a decent enough photograph so what does the medium mean today?’ Screenprints, Polaroids and Drawings invites us to immerse ourselves in Miles Aldridge’s mediums of preliminary drawings, Polaroid studies and printing techniques which includes previously unpublished works. Each image is meticulously crafted to create his vivid dream-like world, lying between cinema, photography and art where his images tell a story much wider than their frame.