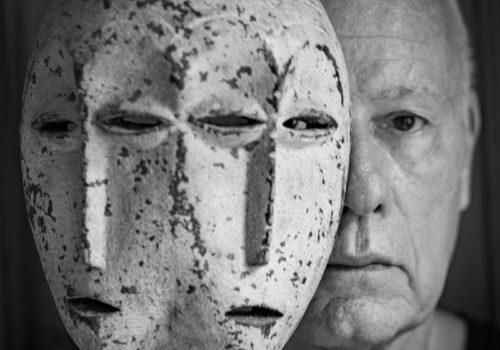 Song of My Selves…

The project is an intimate probe of the complex psychological states that one confronts in dealing with the vagaries and mysteries of life. The images are cerebral dreamscapes. They are an intersection among selves, both real and imagined. They explore the identity of a pensive mind interacting with an exterior reality to create tension and inquiry. It is the act of deciphering a life and an identity as rendered in black and white. There is a dialectic nature to the images whereby nothing is hidden but much is obscured and revealed by glass, by mirrors, by texture and by light. The images both confront and retreat as one gaze emerges intently behind a mask through the eye of another. Masks, meditations and reflections are the unspoken mechanisms that provide a clue to the heart of the matter of the self. They block and interrupt the truth that lies within…the truth that is the I…a series of visual songs of the various selves that define me.

Michael S. Honegger is a visual artist born in Germany with a B.A. in History & Spanish from Duke University, a M.S. in Foreign Service from Georgetown University and a Professional Certificate in Visual Arts from Maine Media College. His practice as a fine art and documentary photographer explores the performative nature of self-portraiture, the complexities of memory and family and an investigation of the ironies of American culture with an expatriate’s eye. He has exhibited his work in numerous juried group shows throughout the United States and Europe including the Center for Fine Art Photography, Photo Place Gallery, A. Smith Gallery, the Southeast Center for Photography, and P.H.21 Gallery among others. His documentary project on the refugee crisis on the island of Lesvos, Greece in 2015 was widely published in major European newspapers and by Amnesty International in their initial press release on the crisis. The Economist and The Guardian have also published his images. He is a European Content Editor for Lenscratch and currently resides in Nice, France and has lived in France for the past 16 years.