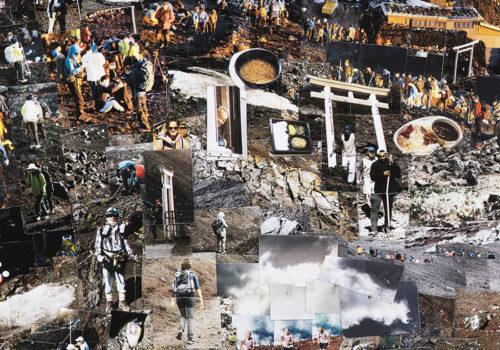 During the pandemic and ensuing lockdowns of 2020 and 2021, the artist found himself spending much more time in his studio in Heda, Japan, which has a view out onto Sugura Bay, over which Mount Fuji rises majestically. Having already accomplished the challenge of walking up to Everest Base Camp and creating a magnificent Diorama of his experience of Everest, Nishino decided to take Mount Fuji as his muse.

Its distinctive, sloping silhouette is steeped in Japanese culture and history, and holds something of a mythical status in Japanese society and is an quintessential element in Japanese folklore and art history. Named after the Buddhist fire goddess Fuchi, the volcano is the holiest of Japan’s “Three Holy Mountains” and is sacred to the Shinto goddess Sengen-Sama, whose shrine is found at its summit. It is revered by Buddhists as a gateway to another world.

The climb up Mount Fuji is steep and can take anything up to 10 hours. Nishino climbed it on several occasions during the official climbing season which is only two months long, July and August, when most of the snow has melted. He climbed it also at night, as many do, and these moments are illustrated by the dark areas in the piece. The sight of the sun rising as one approaches the summit is inspiring and it is through Sohei’s inimitable style that we see how beautiful it must be on his slow purposeful progression towards the morning horizon.

As with all his collage work, Nishino then spent another three months in his studio assembling the 25,000 individual photographs as one giant collage, creating his own personal and contemporary vision of Mount Fuji, inspired by the traditional pilgrimage mandalas of the sixteenth century and the paintings of the Yamato-e, the genre that first flourished during Japan’s Heian period (794–1185), an era of rich cultural activity when the focus shifted towards Japanese subject matter and motifs.

The gallery presents an online exhibition which explores Nishino’s fascinating process of creating the incredible Mountain Line, Fuji, 2022.
A viewing in person at the gallery can be arranged.