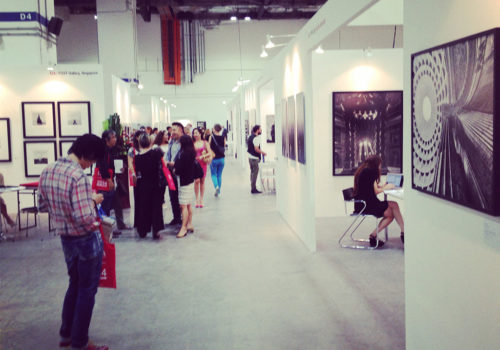 Photography, in its best forms, has finally arrived in town for the first edition of MIA&D Fair in Singapore. 120 artists from 30 countries, 50 galleries, mostly from Europe and Southeast Asia, all mixed and interestingly dialoguing in harmony  though, different in concept, the first time  in town that we have the opportunity to see such an amount of images.

The first impression is that overall the quality is very good: a pleasure for the enthusiasts of the medium as well as for those who love contemporary art and photography as one of the most exploited language nowadays.

Many visitors at the opening, engaged and attentive and apparently competent in contemporary art, I could see them asking and commenting with the gallerists and artists. The area is not too big but appropriate for the show, as the density of artworks was high .

For Singaporean photographers this is definitely their moment, involved in the Singapore International Photo Festival, in the Singapore art museum and eventually at MIA&D fair. Most of them were strolling around or discussing with peers sharing generously their vision and the concepts of their artworks. I could meet and chat with the young Zen Teh and Eiffel Chong as well as with John Clang, all of them represented,  with Robert Zhao Renhui, by the Gallery 2902.

The traditional, analogic photographer Billy Mork, who has witnessed the history and the development of the medium in Singapore,  has a solo show with the Immagini Art Gallery, while the Singaporean based photographer Mathew G Johnson is represented by Goldmann Inc.

Local galleries have interpreted photography art in many different ways, we can enjoy the black and white, surrealistic photos of Rodney Smith brought by Fost, the lightbox with scanned images of Angky Pubardono brought by Mizuma and the great masters as Sebastiao Salgado, Annie Leibovitz, Steve Mc Curry, Robert Polidori and Edward Burtinsky represented by Sundaram Tagore.

Southeast Asian artists are also largely showed: Philipino Wawy Navarroza and Yee I Lann  from Malaysia have fantastic works in the booth of Silverlens and the young thai photographer Krisada Suvichakonpong has a solo installation of multiple pictures in the booth of Richard Koh.

I found very interesting the Mekong platform, curated by Loredana Pazzini Paracciani, focused on the relationship between the river and the inhabitant of the area, showing in various ways how nature can still forge and influence our life, regardless of the on going damage done by mankind.

Interactive and funny approach to photography and video is presented at Flux Laboratory. They project, inside a flashy pink closed booth, videos of the performances and works they promoted in the last years, while a screen, placed on the external wall of the booth, shows the faces and expressions of the viewer inside.

Design, which has been included for the first time in a MIA fair, is discretely represented and harmoniously integrated finding among video and photography a natural habitat.

The MIA&D Fair proposal is interesting as usual and from Singapore I saw the beautiful pictures of Singaporean based Sealy Brandt , an homage to analogic and art of printing.

Last but not least I’d like to mention that I had the opportunity to attend one of the cultural talk proposed by MIA&D Fair. In this one two collectors were involved talking about their taste and their compulsion to buy art.

I have seen MIA Fair from the first edition in Milan in 2011 and I can recognize here in Singapore the same freshness, enthusiasm and pioneering spirit dedicated to the promotion and passion toward the art of photography.