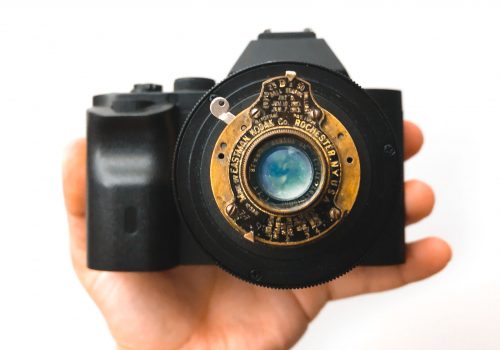 Mathieu Stern is a French photographer born in Paris in 1983. Also known under the wacky pseudonym of “Weird Lens Guru”, his work must be understood from an experimental practice of photography, both in its exploration of technique and of materials often and wrongly considered to be obsolete.

“Photography is an art form that has given birth to an infinite variety of techniques,” he explains. “Since I started taking pictures in 2013, I have continued to experiment every day. These experiments have led me to create a YouTube channel, where I broadcast both my artistic projects and my technical research, including the adaptation of (very) old lenses to digital cameras.  The talented photographer also teaches his know-how in three different Parisian art schools. While waiting to study autochrome, toy-photography, anamorphic lenses or medium format photography, the technician sent us three of his videos, emphasizing the diversity of his practice as well as his inventiveness.”

“I had been obsessed with this idea for a long time, so I took advantage of a trip to Iceland to take the plunge and achieve the first iceberg ice lens in history! It has a very short lifespan (about one minute).”

A World War I objective adapted on a sony A7II

The “Kodak’s Vest Pocket Camera was the objective of World War I soldiers. I found one at a flea market near Paris. After a few adjustments, I managed to fit it on my digital camera. So I used this lens that had been sleeping in the dark for a hundred years to make a short film in a peaceful Europe far from the trenches.”

A lens in Lego

“The confinement this year didn’t prevent me from continuing to experiment in photography, my wife and I spent our weekends with the project of making a lens in Lego (with the possibility of focusing manually)”.

Cyanotype printing of a photograph of a century-old cat

“I found a time capsule in the attic of my family home with, in the middle of elements belonging to a little girl from the beginning of the 20th century, two glass plates: photographic negatives.

So I set out to find out what was hidden in the image but without Photoshop – I wanted to use a technique as old as these plates: cyanotype.

The film recounting the development process was quite successful. Following this video, I received messages from all over the world from people who were touched by the story of this cat and these photo plates that have traveled through time to testify to the love of this little girl for her four-legged companion”.