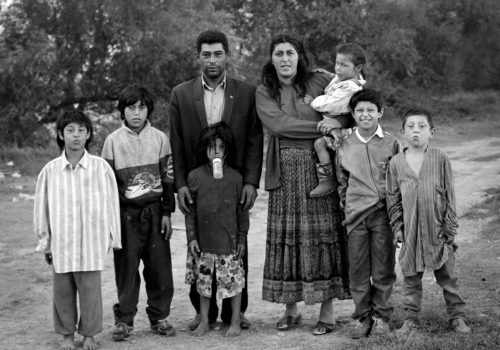 I met the Gorgan family in 1995 when I was studying at the Arles School of Photography. The parents, Johny and Ninaï, then lived in a caravan, with their seven children, on land between the freight station and the Rhone. I did not know anything about this community and did not know then that this Rom family had been living in France for more than a century.

I made my first images in black and white, in line with documentary tradition against those who were still foreign to me. I kept a distance and tried to understand what this medium could still teach us about them.

The discovery of the few archives that they had and then the shots taken in the station photo booth with the children quickly made me understand that the diversity of forms and points of view were necessary to account for the density of the life that presented itself to my eyes.

My move to Paris in 2001 took me away from the Gorgan’s for several years. The last images I made are those of screaming children, facing the wall of a prison, to communicate with their incarcerated father.

It was in 2013, more than ten years after making these photographs that we found ourselves, as if we had left each other the day before. The evidence that this story should continue as long as possible immediately appeared to me. They then gave me their pictures of these past years without seeing each other.

Twenty years after this founding meeting, it seemed to me that the time had come to make this exhibition and this book. Time has done its work on the bodies and faces of the Gorgan’s. A time different from that of our gadjé world. Johny and Ninaï are now grandparents and caravans have sometimes been abandoned for apartments deemed more comfortable.

I lived with them an experience that exceeds that of photography. At their side, I witnessed, for the first time, the birth of a child; At their side I also watched the body of the one I had seen growing up: Rocky, who died suddenly at the age of thirty.

The exhibition recreates the individual destinies of each member of the family and traces the story we have built together. Face to face. And now, side by side.