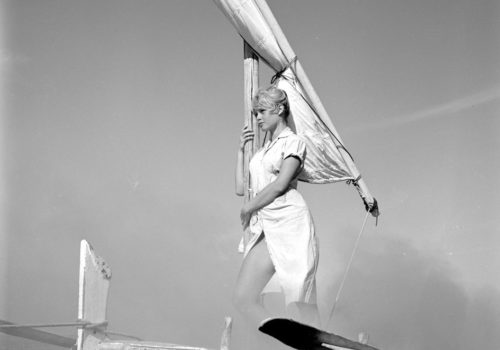 The City of Nice invites you to discover the exhibition « Mirkine par Mirkine : Photographes de Cinéma » at the Musée Masséna. Irreplaceable witnesses of a great era of French cinema, intimately linked to the City of Nice and to the Studios de la Victorine for which they played a major role, Léo and Siki Mirkine (father and son) have built in half a century a collection of rare and intimate images. They thus experienced and then recreated from the inside the shooting of 150 essential films of the 7th art, a large part of which were filmed at the Studios de la Victorine and are the greatest masterpieces of French and world cinema and thanks to which they were able to approach the biggest stars and express their talent as photographers.

Léo Mirkine is the photographer of the 7th art with an extraordinary destiny closely linked to the history of Nice, in the port of which he arrived almost a century ago, fleeing the Bolshevik Revolution. A graduate of Fine Arts and a polyglot, he also studied architecture in Paris. While developing his passion for photography, he quickly turned to cinema. First an extra, his extraordinary personality and charisma made him stand out from the crowd. He became an assistant decorator before asserting himself as a still photographer. In 1940, he opened a store in Nice, “Tout pour le Cinéma et la Photo”, alternating reportages, portraits and forays on the neighboring sets of the legendary Studios de la Victorine. Resistant from the start, he turned his shop into a letterbox for resistance movements, where identity photos and false papers were produced. Despite the turmoil of this period, Mirkine did not flee the sets, however, as he was found on the set of films such as Les Visiteurs du Soir  (1942) or Les Mystères de Paris  (1943). Léo Mirkine also speaks far from the field. An esthete passionate about the female nude, he became one of the first reporters lucid about the situation in Africa and the post-war USSR.

From 1952, Mirkine is conjugated in the plural form. On the set of Fanfan La Tulipe, Léo was joined and supported by his 18-year-old son  Siki (Yves). The latter in turn contributes to enriching the Mirkine collection. For more than thirty years, he will ride alone, whether as a set photographer for Duvivier in Poule de Poule, Autant-Lara in Le comte de Monte Cristo, Verneuil in Une manche et la belle; and will speak on camera as the preferred assistant operator on Georges Lautner’s films, shot at the Studios de la Victorine.

In this exhibition, the Musée Masséna invites you to discover more than 250 prints, a reconstruction of the Studio Mirkine at 88 rue de France, original works and unpublished archives through an aesthetic and historical fresco that begins in 1933 and immortalizes a half century of French cinema. From Mistinguet to Bardot, from Brasseur to Belmondo, from Abel Gance to Vadim, the visitor will capture in turn the talent of Léo Mirkine, set photographer of Le Chanois, Pagnol, Carné or Clouzot, the favorite portrait photographer of Sologne, Blier or Morgan, the photographer of international stars and more than 160 feature films, of the great classics Et Dieu créa la… femme by Roger Vadim or, to name but a few, Les Diaboliques by Henri Georges Clouzot or Le testament d’Orphée by Jean Cocteau.

The exhibition highlights this family saga of which Stéphane Mirkine (Léo Mirkine’s granddaughter) is the messenger.