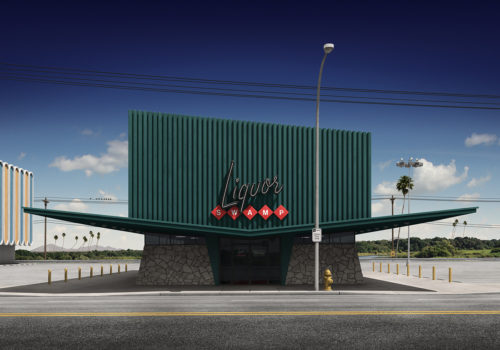 Marshall Gallery presents an exhibition of works by German artist and designer Robert G. Achtel. This is Achtel’s second presentation with the gallery and the first full display of his suite of nine works from The City of Namara, including the debut of three new pieces from the multi-year project.

The City of Namara by Robert G. Achtel presents an American city that exists somewhere between reality and fiction through nine original composites meticulously created from the artist’s photographs and designs. The citizens are nowhere to be seen, yet it’s the implied human drama presented in each piece that pulls the viewer into a thrilling narrative of excess and despair. On the surface, the series alludes to a period of architectural upheaval when the standards of Modernism were questioned, if not rejected, by a new school of designers. At the end of the 1960s, the truth had become all but relative and this new age was embedded in the architecture through irony, seduction, and profitability.

In 2008, among the outskirts of “Old Vegas” far from the strip, Achtel found a dubious yet magical place where the demise of Modernist ideals and the rise of postmodern concepts still lingered in the desert air. Having closely studied the work of architects Robert Venturi and Denise Scott Brown, Achtel found a creative lead worth pursuing, a larger story about society and modern life, reflected in the American roadside; “Glass facades reflect the opposite side of the street, but they also reflect the hopes and fears of the society from which they originate.”

Through his inventive architecture, the artist subtly reflects upon existential human themes such as love, loss, sexuality, and addiction. Achtel’s imagined city is a place of contradictions where the promises of postwar America still resonate, yet at the same time, the realities of postmodern life take the stage, with isolation and emptiness being a dominant theme. It’s no coincidence as his initial photography took place during the recession of 2009 when countless commercial buildings were left abandoned. The viewer discovers this conceptual duality in the pieces through neighboring structures such as the “Relapse” nightclub near his psychedelic drugstore or the conflicting messages of neon signage, as in the “Lost Lovers” facade which encourages one to forgive and forget, but at the same time offers you to “win ‘em back”.

To create this perpetually sun-drenched yet sardonic memento of late 20th century America, Achtel has pioneered a truly unique digital process, compositing thousands of his reference images made across Nevada, Florida, and California. From these disparate and exceedingly complex elements, he has arranged light, shadow, texture, and color with exacting precision. In each work, a chord of vivid hues reminiscent of early chromatic films saturates the scene, perhaps as a metaphor for the energetic, uninhibited ambitions of the period. As a result, The City of Namara, like the outskirts of those urban oases from which its components originate, appears simultaneously real and artificial, oscillating between optimism and cynical jest.

Robert G. Achtel (b. 1980) lives and works in Wiesbaden, Germany. Coming from a prolific and awarded background as a graphic designer, it’s easy to recognize the influence of Achtel’s tradecraft in his art practice. For this presentation, the artist is sharing many of the source photographs used to construct each piece for the first time, providing an entertaining insight into his working process and vision.