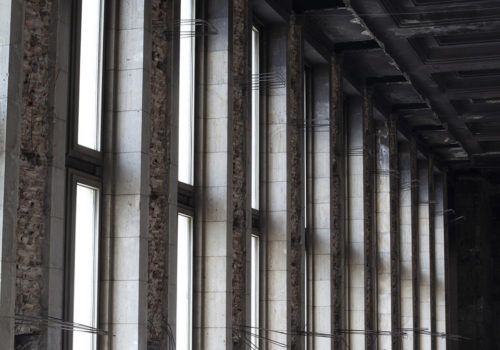 Marshall Gallery presents the debut of Judith Stenneken‘s most recent body of work which continues her inquiries into a world of constant change and how the radical acceptance of impermanence might enrich our lives.

The exhibition is comprised of a wide-ranging scale of new color and black-and-white photographs as well as video and audio-based media. The artist will be present at the opening and in conversation with Douglas Marshall at 4:00 pm.

In “a mountain is only a slow wave”, the assumed solidity of our world crumbles and reveals a pattern of constant change. A world of shapeshifting, where inside and outside merge, where rocks turn into water and identities are fluid. As the clarity of these demarcations slowly fades, a sense of the interconnectedness of all things manifests itself. The collection of still images on view were made over the span of more than a decade (2008-2021) in a multitude of locations including Japan, USA, Germany, Austria, Greece and England, and include portraits, landscapes, architecture and abstractions. The color portraits were made in collaboration between the artist and asylum seekers from Syria and Afghanistan, at Berlin’s defunct airport Tempelhof, which was partially converted into a refugee camp between 2015-2018. Culling conceptual inspiration from a range of sources including quantum physics, eastern philosophies, mindfulness practice and neuroscience, Stenneken interprets a complex, ever-changing world through stoically composed imagery. A recorded piece by Syrian poet Lina Atfah, written in collaboration and in response to Stenneken’s work, plays within the space, as well as Stenneken’s video work “Staircase” from 2018.

Judith Stenneken is a German artist working in photography, video and installation. She is based in New York City and Berlin. Stenneken holds an MFA in Photography, Video and Related Media from the School of Visual Arts New York (2013). She since has held solo exhibitions with Galerie f5.6 in Munich (2016) and Benhadj & Djilali Galerie in Berlin (2017). Flowers Gallery NY showed her video work ‘Staircase’ as part of the exhibition ‘yes no maybe’ (2018). Stenneken has produced three self-published photo books: LAST CALL (2010) – a project documenting the slow closure of Berlin’s Tempelhof Airport – and ILLUMINATE NATURALLY IN DARKNESS (2017) – a poetic dive into a state of transition, exhibited at Marshall Contemporary in 2019. “A mountain is only a slow wave” is scheduled for publishing in Spring 2022.

For works sold from the exhibition, the artist and gallery will donate a percentage to benefit the efforts of Sea-Watch, an international maritime rescue and human rights organization addressing the migrant emergency in the Mediterranean Sea. More information can be found at www.sea-watch.org