Marion and Philippe Jacquier: “It’s all about the eye…” 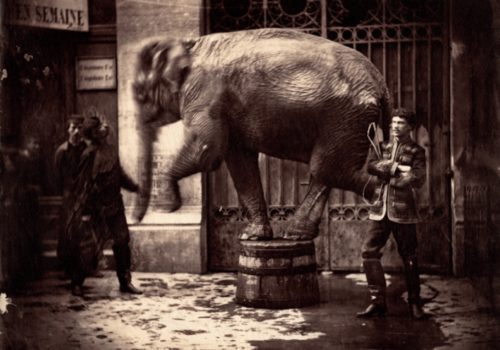 Interview with Marion and Philippe Jacquier, founders of the Galerie Lumière des Roses in Paris, specializing in anonymous photographs.

In 2004, Marion and Philippe Jacquier, then film producers, decided to trade  moving images for  still images. Talent scouts (they produced the first films of Christophe Honoré and Anne Fontaine), they became anonymous and amateur image scouts of the 19th and 20th centuries, relying on their eye alone to find photographs that, in the middle of a thousand others, stood out from the crowd by their particular presence. Only a trace of their former career remains: the name of their gallery, Lumière des Roses. It is the title of a script that told the fascinating story of Gabriel Veyre, Philippe Jacquier’s great-grandfather and first operator for the Frères Lumières. Due to a lack of funding, they never succeeded in financing this film project, and the story today remains as only  a few words illuminating the front of their gallery.

In 2004, their first exhibition in Montreuil was a success. Their intuition had proved right. Anonymous photography, until then unexplored in the the ultra-competitive photography market, attracted many collectors enamored by the originality. They were selling, at the opening, a splendid photograph from 1870 of a Circus elephant for a price that had already seemed high to them. One hour later, the elephant tripled in value. At the end, the thirty exhibited photographs were all sold. From then on, the challenge was to scout out others of equal quality, unique prints difficult to find without a trained eye. Philippe skimmed auctions, fairs, and flea markets from the four corners of the world. He bought thousands of photos that he subjected to Marion’s eye. Together, they sorted them and picked out those which would grace the walls of their gallery. Year after year, their eyes got sharper, their library got larger, their funds grew, and their finds were hung on the walls of museums and collectors around the world. Today, they expect to double the area of their exhibition space in Montreuil.

But let’s not get ahead of ourselves. In 2005, the question of their visibility first arose. There was only one solution: Paris Photo. No one could believe it. Amateur photographs next to the biggest names in photography was a risky bet. Nevertheless, in 2000, the New York Metropolitan Museum had exhibited, for the first time, anonymous photographs from the turn of the 20th century as part of the exhibition Other Pictures. These photographs, from the Thomas Walther collection, were then added to the collections of New York’s MoMA. The market was ready to welcome Galerie Lumière des Roses. Valérie Fougeirol, then director of Paris Photo at the Carrousel du Louvre, opened its doors to the gallery. Marion and Philippe opened their stand with a series of fairground shots from the 1920s-1930s. Success was there. The fair became an event that was a must ,  during  which the gallery achieve a good portion of its turnover. Throughout the year, gallerists prepare and carefully choose the photographs that they will exhibit. They organize a non-linear hanging where the frames touch each other and fill the wall like the salons of the 19th century, creating links and echoes amongst photographs of diverse techniques and temporalities.

Over the years, the gallerists made many discoveries. Each time, long months of research are indispensable to gather the necessary proofs to identify photographs for which was felt interest. Investigative work was the essence of their daily life. For example, in an archive , they discovered a photograph, yellowed by time, representing the photography studio of Gustave Le Gray (1820- 1884) in Cairo. This rare photographic document told the story of the end of the life of the photographer in exile, a period for which there is not much information. The visitors can also admire the poetic rapidity of a photo from 1892, taken by an amateur discovering the joys of the snapshot. A diver jumps off from a cliff , a white trace etched upon the black rock. In spite of that (there were no viewfinders on these new cameras), the photographer succeeded in making a sublime image. One could also mention a surprising photograph from 1910 that depicted a newborn held by a man with a face hidden by a black veil. It was a tradition at the time to photograph one’s newborn facing the camera. The person holding the newborn (most often a woman) had to be invisible   not to steal the limelight, hence the black veil.

Marion and Philippe Jacquier’s findings make curators happy , they draw in the gallery’s funds to enrich their collection. In 1853, Englishman Charles Thurston Thompson (1818-1868) made an astonishing series of self-portraits. While he was hired to photograph a series of buildings and art objects, he used a mirror to make what are perhaps the first self-portraits in the history of photography. The series was acquired by New York’s MoMA. Many private collectors also come to the gallery. Some of them only collect anonymous photographs and, sometimes  started their collection with the opening of the Galerie Lumière des Roses. Others appreciate  anonymous photography as a counterpoint to their collection of known artists.

The right price, according to Philippe Jacquier, is what the buyer is ready to spend and at which the gallerists are ready to sell. Nevertheless, the unique character of the prints sometimes makes it difficult to assess the right price. A photograph, invaluable due to its background or rarity (like Gustave Le Gray’s photography studio), can remain unsold because the price is judged to be too high. Another can totally unexpectedly be the object of high demand (the Circassian elephant of 1870), so the fixed price is too low. It also happens that, despite the large amount of research made, a photograph will not be identified by the gallerists, who will then sell it at a much cheaper price than its real value. Marion and Philippe talk about how, without knowing it, they found themselves in possession of an André Schelcher photograph from 1909 that had inspired not only one of Delaunay’s most famous paintings (Tour Eiffel et Jardin du Champs de Mars, 1922), but also Le Corbusier. The buyer recognised the photograph and got away with a very good deal. In another scenario, the gallerists got their hands on a superb series of photographs that, because of its importance and subject, was a hard sell. In 2016, they discovered an ensemble of more than one hundred and fifty images taken by the same man  between 1940 and 1970 whom they called “Zorro”. In the privacy of his apartment, he staged, dressed up , dreamed of himself  as heroes and gave life to his fantasies. He added himself to a long line of photographers such as Claude Cahun, Pierre Molinier, and Cindy Sherman, who do the same. A single print does not make sense without the rest of the series, and the series is a particularly weighty investment. It is still looking for a buyer.

According to Philippe Jacquier, the important thing when he discovers a photograph is not so much the price at which it can be sold, but the mystery that it holds. Marion and Philippe look for photos that “they can’t quite navigate”, photos that are and will forever remain a sort of enigma. A little while ago, they found an album containing more than a hundred photos that they called  The Absente. In 1930, a man separated from his wife, whom he loved, decided to return to the places where they had been together. From each place, he took a photograph and marked a red cross where she had been, where she smiled, loved, spoke, or cried. We know nothing more of this story, of its past, of its future. All that remains is this album, a testimony to the power of absence, whose story the Galerie Lumière des Roses brought back to life. Sophie Calle was one of the first to contact the gallery to inquire about the album.

This article was written after a public interview organized by the Profession Photographie association and led by Clara Bastid at l’Institut National d’Histoire de l’Art on March 1, 2017.