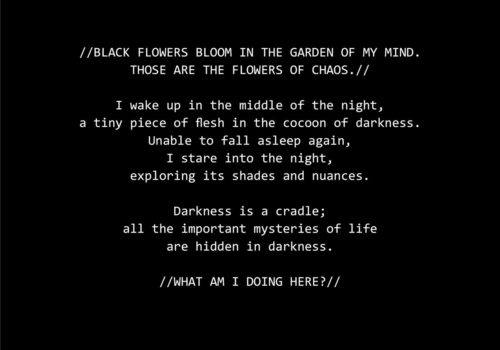 The Greek word‘Chaos’means‘ emptiness, vastvoid, chasm, abyss’. Theconcept of Chaos in cosmogonic myths refers to the void state preceding the creation of the universe.

Chaos // The Elements is a project that deals with the notion of creation, in other words, with the transformation of chaos into tangible forms. As an artist, I’ve always been fascinated by the act of creation itself. Something evolves from nothing; it has never existed, but it comes into existence.

The whole project has been a response to the dramatic changes that were triggered by the pandemic. At some point, I found myself completely disconnected from other people; I felt as if I were floating in the void with nobody around. I had to face myself and I had to face my own insecurities, fears, and ghosts. Making self-portraits was a way to deal with uncertainty, detachment, and solitude.
Maria Pleshkova

Maria Pleshkova (b. 1986) is a multidisciplinary artist working in photography, video, and writing.
Pleshkova graduated from the Law Faculty of Moscow State University, but her career in law wasn’t long because of her passion for art. Later, she studied Photojournalism at Moscow State University and Short film production at School of Visual Arts (Moscow). She attended the Eddie Adams Workshop (USA) and the International Summer School of Photography (Latvia). Also, constantly learning on her own has always been essential for Pleshkova. In the end, it was self-learning that foremost shaped her artistic practice.

Pleshkova’s artworks have been shown internationally, including exhibitions and festivals in Russia, France, Spain, Italy, Georgia, the Czech Republic, and Slovenia. Her works are part of the Tbilisi Photography & Multimedia Museum collection and of numerous private collections.

In her work, Pleshkova explores the boundaries of self-portraiture. Her life and art are inseparably connected: she lives her life through her art, making intimate and self-revealing projects. She explores the Microcosm, the human universe, and certain moments of the highest intensity of life. Pleshkova’s projects are always autobiographical, but the autobiography is just an excuse to talk about things that are universal and common to all humankind.

Pleshkova says, “I make self-portraits because I am so often alone, and because I am the person I know best. Creation is the opposite of death, and each self-portrait is the answer to the question “Am I still alive?”

Working in different mediums, Pleshkova creates her own artistic universe which can be described as sophisticated and gloomy. Her projects deal with such themes as love, sexuality, solitude, pain, dreams, death, and mysticism.