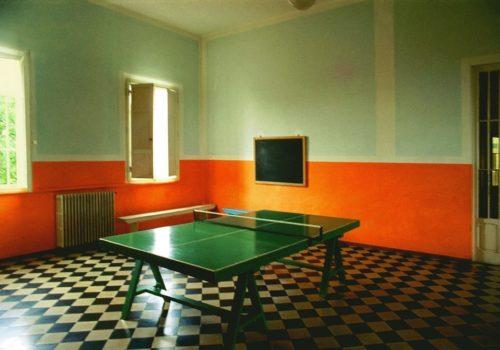 Manolis Baboussis is a Renaissance man, who will have lived through two centuries. He is an architect, photographer and a pioneer in the teaching of photography in Greece: it was he who initiated the teaching of photography at the School of Fine Arts in Athens. Manolis Baboussis presents today, in the 2300 m2 of the art space of this same school which hosted Documenta 14, where he was also vice-rector and whose parking lot he transformed into a garden, a personal exhibition, “retroprospective titled “The Garden”. Forty years of creation by one of the most important contemporary Greek artists.

Manolis Baboussis discovered photography in his student room in Florence and, in this basic space, the “camera” (the camera, the room) put the whole world within his reach. He was a pupil of Adolfo Natalini, close to Superstudio, and lived from the inside the experience of radical architecture and deconstruction.

The first steps of Manolis Baboussis in artistic creation? He was then barely twenty years old and discovered the mental asylum of Volterra, where he initiated an action with a group of musicians. As the architect of the void that he is, he photographed the spaces of the asylum, these witnesses of ordinary madness: empty but embodied spaces. Baboussis also photographed the very existence of the photographed subject. A work that changes the way we look at others.

For his architecture diploma, Manolis Baboussis proposed the demolition of this same psychiatric hospital. “My ‘crazy people’ today are the others, the different ones, the hypersensitive, the sick, the dreamers, the honest people, the undocumented, the jobless – they are in reality still the same and they are still there. and their traces, behind my images, in my obsessions, in confinement and in nature. They are the ones who give voice to the trees in my works, they are still the ones who watch us, from behind the horizons. Giving voice to the trees: the artist is constantly working on it. By planting them – 300 to date on the island of Kea – and photographing them.

But he also photographs the absurdities of his country, Greece. “To be Greek”, for Manolis Baboussis, means “to live in a land of great beauty and inaccuracy. Baboussis’ photographs explore the country’s institutions and illustrate the permanent crisis situation in which Greece has found itself for decades. Baboussis thus photographs one of the most open wounds of Greece, concrete wounds – more precisely, concrete columns, unfinished walls erected in the countryside, on the islands, everywhere. It is a question of being able to affirm that one has built, even if it is to never complete the construction or inhabit it. The roof once installed, the construction is indestructible and its existence validated by the State. These constructions are skeletons before the flesh (Squelettes, 2000-2010) and all that remains for Baboussis’ Femme de Vitruve – a naked woman, body inverted – is to practice yoga, in search of meaning. that would come from elsewhere.

The large series of black and white analog photographs devoted to Athens (1985-1996) reflects Manolis Baboussis’ vision of his city: “A living museum of irrational constructions, indefinitely postponed restorations, repeated wounds, which we continue to contemplate . »

Shown for the first time, a large photograph (Untitled, 2018) closes the exhibition. A door to an elsewhere: that of a hospital: the “Sotiria” Hospital in Athens (literally, “rescue”). The door is damaged and repaired, its handle held in place by transparent plastic tubing used for infusions. A door that seems to be covered in bandages. This is how objects are repaired. This is how humans are repaired, too. Manolis Baboussis, with his images and his poetry, has always tried to repair the world, not without highlighting the voluntary wounds that we inflict on it.

The artist’s website offers, among other things, a detailed CV: https://manolisbaboussis.gr/; many catalogs have been devoted to him; that of the “Le Jardin” exhibition will be published in November 2022.

Several collections of poems by Manolis Baboussis have also been published, in Greek and some in English.