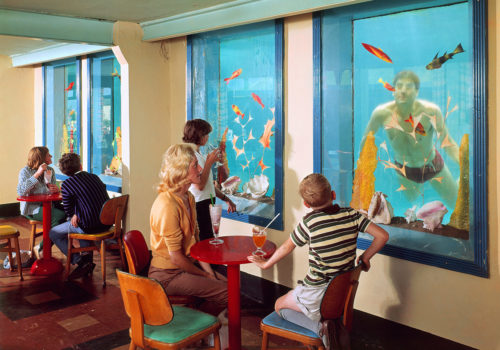 The Multimedia Art Museum, Moscow presents the exhibition ‘Our True Intent Is All for Your Delight’. Eminent photographer, member of the legendary photo agency Magnum, curator and collector Martin Parr rediscovers the work of John Hinde’s Irish photo studio, which changed our attitudes to postcard art forever. The exhibition features photographs by Elmar Ludwig, Edmund Nägele and David Noble, who worked at the studio in the 1960s to 1970s. These shots of the Butlin’s holiday camps beloved by British vacationers were intended for use as postcards and provide a shining example of the unrivalled skill of Hinde’s photographers. ‘These images seem to me to be some of the strongest images of Britain in the 1960s and 1970s,’ says Martin Parr. In many ways they shaped his own distinctive visual language.

The Butlin’s holiday camps, a true revolution in the leisure industry, were a popular all-inclusive package introduced by British entrepreneur Billy Butlin. He first conceived the idea of opening a holiday camp with an integrated approach to service during a bad experience on Barry Island, Wales, when he was locked out of his bed and breakfast during a wet holiday weekend. Butlin decided to create a resort centre where families could spend their holidays without fretting at the vagaries of British weather.

The first holiday camp was opened in 1936 (coinciding with the introduction of statutory six-day annual leave), although the building was appropriated for army barracks during the Second World War. The postwar era proved the golden age for Butlin’s holiday camps, offering recreation accessible to all. They promised hot water on tap, electric light and three meals a day — facilities that many of the guests lacked at home, and moreover a variety of entertainments, from ballroom dancing to monorail trips.

The camps were very popular, with many of the ten million British holidaymakers returning several times. Butlin himself wanted a ‘friendly and relaxed atmosphere’ to reign in his holiday centres, as evidenced by the slogan he chose: ‘Our True Intent Is All for Your Delight’. He first saw the phrase on a fairground organ, claiming to have found out only years later that this is a quote from Shakespeare’s comedy ‘A Midsummer Night’s Dream’.

Wanting to update the image of his holiday camps, in 1965 Billy Butlin turned to the English photographer John Hinde, the pioneer of colour photography who founded his own company for postcard production in 1956. As a perfectionist Hinde always sought technical innovation, and his output stood head and shoulders above the efforts of competitors. The public found his highly saturated, colourful images very attractive, and by the mid-1960s John Hinde Ltd. was one of the largest postcard companies in the world. In 1965 he gave up doing the day-to-day photography himself and hired two young German photographers, Edmund Nägele and Elmar Ludwig, and later the British photographer David Noble, to work on the Butlin’s commission for postcards that could be sold to holidaymakers.

John Hinde’s studio photographers kept to a clearly defined house style. The vivid images were notable for innovative use of colour and meticulous composition. During processing many were partly hand-coloured, with clothing painted in brighter hues and enhanced clouds in the sky. The fictional world created by Hinde photographers exerted a considerable influence on the real world.

‘While Hinde’s imagery has slipped into the national subconsciousness, no history of photography has yet acknowledged their influence or importance,’ says Martin Parr. ‘Bringing these Butlin’s images to a new audience is a mission. The impact they had on me in 1971 was intense and they have haunted me ever since. Each image offers everything a good photo should. They are entertaining, acutely observed, and have great social historical value. They appear casually taken, yet we know from the photographers how difficult they were to stage. As with all Hinde imagery, they show an idealised view of the world and, after the passage of time acquire the power of a lost dream.’

Photographers’ texts used in the exhibition are from interviews by David Lee, published in ‘Our True Intent Is All for Your Delight’ (Chris Boot. London, 2002).

Our True Intent Is All for Your Delight