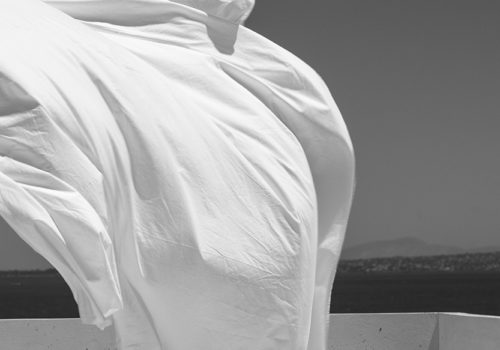 The Multimedia Art Museum, Moscow presents an exhibition by Koka Ramishvili, a contemporary Swiss-Georgian artist who has participated in the 53rd Venice Biennale and numerous exhibitions at major museums worldwide, including the Tate Modern, the Museum of Modern and Contemporary Art (MAMCO) in Geneva, and the CoBrA Museum in Amsterdam.

The exhibition is named after the ‘Light Machines’ series of photographs in which Ramishvili explores the key themes of his work — movement, the conjugation of time and space, and the perception of light. While devising the subject compositions for his shots the artist followed the principles of the classical genre of still life, carefully working out plastic volumes with lighting. Although he was not interested in frozen ‘dead nature’, but rather in the processes that occur with objects — the ‘invasion of time’, the metamorphosis of figures, light and shadow.

In creating his ‘machines’ Ramishvili turned to the legacy of great modernists of the 20th century, citing architectural elements in the metaphysical pictures of Giorgio de Chirico or the sculptural forms of Constantin Brâncuși, whose first exhibition in Russia also took place at the Multimedia Art Museum. Like Brâncuși (we need only recall the famous sculpture ‘Leda’, which the artist placed on a disc set in motion by a clock mechanism), Ramishvili puts his geometrical objects on special rotating stands. Using the technique of long exposure, he captures the movement of objects in space, emphasizing the transformation in the plasticity of their form. Shedding their materiality, they plunge into a transitional state bordering on the abstract or ephemeral. To convey these subtle changes the artist used one of the most advanced cameras — the Leica M Monochrom 246, featuring a unique lens with an aperture of 0.95 that has perceptual capabilities double the capacity of the human eye.

Koka Ramishvili’s works follow mythological and biblical references (the triptych ‘Aeolus’, the series ‘Creation’), but natural-scientific works are no less important as a source for the artist. Hence ‘Light Machines’ was created partly due to the author’s study of works on quantum mechanics and astrophysics.

The photos Ramishvili took outside the studio are united by a common poetics shared with ‘Light Machines’. Light and the released energy of space are also the leading characters here. It should be noted that while processing these shots Ramishvili, who began his career as a documentary photographer, often artificially changes the image, manipulating the light post factum. In ‘Three Stars (Evolution)’, for instance, several dazzling celestial bodies suddenly appear in a clear sky, and in ‘The Shining’ a bright illumination takes over the woman’s countenance, also at the behest of the artist.

Of course the word ‘photography’, the technology of capturing an image, actually means ‘drawing with light’. Ramishvili’s works in which he uses light to erase visible boundaries between the upper and lower worlds are surprisingly in tune with this poetic definition.

Koka Ramishvili was born in 1956 in Tbilisi. He studied industrial design, architecture and cinematography at the Tbilisi Academy of Arts. Since 1990 he has participated in group exhibitions in Berlin, Glasgow, the Arnolfini Gallery in Bristol and the Häusler Contemporary galleries in Munich and Zurich. From 1991 to 1994 he worked in the studio of the artist Wolfgang Flatz. In 1997 he received the international Bauhaus Award for his video installation ‘Signal’. He relocated to Geneva in 2000. Ramishvili has participated in exhibitions at major cultural institutions such as the Tate Modern in London, the Goethe-Institut in Berlin, the Pinacoteca Nazionale in Bologna, etc. He took part in the International Festival of Documentary and Animated Films in Leipzig, and the Cairo Biennale. In 2009 Ramishvili represented Georgia at the 53rd Venice Biennale. He currently lives and works in Geneva.