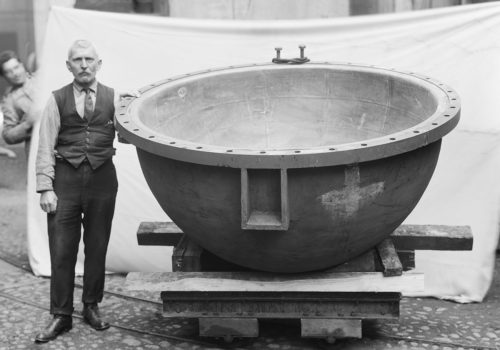 Commissioned by leading Italian entrepreneurs, Girolamo Bombelli (1882—1969) spent 40 years photographing the country’s largest industrial sites (mainly in the northern province of Lombardy), creating a unique photographic record of Italy’s modernisation and industrialisation, as well as the formation and rise of such legendary brands as Martini & Rossi, Pirelli, Bassetti, and others.

Throughout his creative career Girolamo Bombelli has worked extensively, photographing works of art for art galleries, auction houses and publishers. The exhibition at MAMM is remarkable in that it shows another facet of his work.

The exhibition features images of the legendary Pirelli skyscraper designed by Gio Ponti, as well as the production complex of the Italcima chocolate factory, recognised as one of the best examples of industrial rationalist architecture. Bombelli’s photographs also include the house-laboratory of Nicky Chini (the famous manufacturer of ties and sportswear), who created his enterprise in the image and likeness of a medieval craft workshop; the Sesto San Giovanni & Valsecchi Abramo Factory, a leader in the production of high quality home appliances in the 1920s; the workshops of the Brill chemical factory, producers of high-quality shoe polish; and the famous Martini & Rossi distillery.

The MAMM exhibition is the result of collaboration between the Central Institute for Cataloguing and Documentation (ICCD) and the Italian Institutes of Culture in Moscow and St. Petersburg. Its goal is to reveal to audiences for the first time the stunning archives of Bombelli’s industrial photography from the Institute’s collection, and also to acquaint the public with the history of Italy’s industrial heyday in the first half of the 20th century

The origins of the Central Institute for Cataloguing and Documentation are closely connected with photography. Its history begins with the emergence in the late 19th century of a Photographic Cabinet intended to document, preserve and protect the country’s cultural heritage and produce maps. Thanks to these activities and the acquisition of important archives, today the Institute holds one of the most significant national collections of historical and aerial photography. After various reorganisations the National Photographic Cabinet (GFN) became part of the Central Institute for Cataloguing and Documentation (ICCD), a division of the Italian Ministry of Cultural Heritage, Cultural Activities and Tourism.

From the collection of the Central Institute for Cataloguing and Documentation (iccd), rome