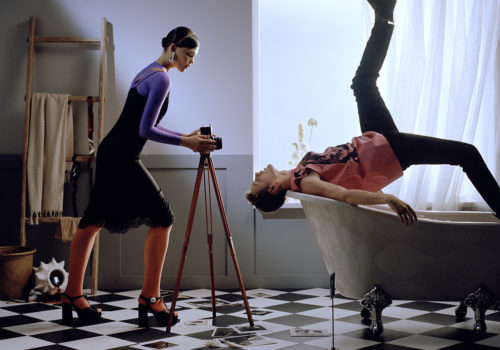 As part of the ‘Fashion and Style in Photography 2021’ festival and ‘Rodchenko Art School at MAMM’ programme, the Multimedia Art Museum, Moscow presents ‘Crazy Is Immediate’, an exhibition by Emmie America.

Emmie America was born in 1996. Her life and work are based between Moscow, Paris and London. She has taken photographs for prestigious magazines such as ‘Vogue’, ‘Numéro’, ‘L’Officiel’ and ‘The Blueprint’, as well as for major brands including Calvin Klein, Nike, UGG, Urban Outfitters, and many others. Emmie America teaches at the Rodchenko Art School.

A recognisable style and an extraordinary approach to fashion shoots have made Emmie one of the most sought-after modern photographers. Her images blur the line between commercial and artistic photography, and each advertising campaign becomes a self-sufficient novella with its own carefully devised aesthetic and plot.

In early childhood Emmie America received a Kodak disposable film camera as a present — it was then, according to the photographer, that she first felt ‘the power of the camera’, which has the capacity to ‘completely overwhelm you and take you beyond the boundaries of reality’. At the age of ten Emmie went to study in the UK. Classes in photography and drawing helped her get used to life in a foreign country. At that time her pseudonym appeared: classmates had difficulty pronouncing a Russian name and she soon went by the Internet nickname Emmie America.

Emmie began taking her first fashion photos at the age of 13, at 15 she won a scholarship to one of the best schools in the USA, and at 17 she started a bachelor’s degree in photography at the famous Parsons School of Design while simultaneously studying in the Culture and Media Faculty at the Eugene Lang College of Liberal Arts. At university she became engrossed in the theory of photography and realised the uniqueness of this art form. ‘Photography inspires confidence,’ says the artist. ‘We tend to believe photos, even when we know they’re staged.’ Photography allowed Emmie not only to combine her interest in fashion and painting, but also to transition fictional worlds into reality.

Emmie America has been strongly influenced by photographers like Bruce Davidson, Larry Clark and Nan Goldin, who focused on representatives of youth subcultures, outsiders and marginalised people. Emmie admits that fashion photography was never her main source of inspiration. However, this genre permits the creation of brilliant extravaganzas, where clothes and accessories are not protagonists and only complement the images of the subjects portrayed and reveal their character. According to the photographer fashion has always interested her, primarily as a means for self-presentation and communication.

In 2018 the magazine Numéro Russia featured the photo series ‘24/7’ and ‘Live Happily Ever After’. This publication instantly attracted huge attention to the young author and Emmie America was bombarded with photo commissions.

The ‘24/7’ series pays homage to the American artist Carrie Mae Weems and her famous photographic project ‘The Kitchen Table Series’ (1990) about the family life of a present-day African American woman. Emmie America refers back to Weems’ compositional set-up — in her frames all the events and experiences similarly unfold around the kitchen table and compile a mosaic of everyday life, behind which the loneliness and complex relationships of the characters are concealed. The image of a house inhabited by eccentric personalities — be it bohemian rebels in decadent interiors or mad aristocrats — provides the key to Emmie’s work.

In search of references for her fashion shoots, Emmie America often turns to the history of modern photography, rethinking it in the context of the present and her own identity formed under the influence of several cultures. A series of shots taken on the beach refers to the work of outstanding British photographer Martin Parr, and also to images by the Dutch photographer Rineke Dijkstra in the series ‘Beach Portraits’, depicting teenagers on the threshold of adulthood. Emmie’s view of her characters is both benevolent and ironic.

The visual language of Emmie America is influenced by filmmaking. On a shoot she acts as director and producer. She rarely uses flash for lighting and illuminates not only the characters but also the entire scene, creating an atmosphere reminiscent of cinema.

As a matter of principal Emmie only shoots on film, usually in medium format, and she prepares extensive storyboards for every project. After explaining her concept to the models in detail, she lets them decide for themselves how to ‘live’ in this invented world. As a result her staged projects acquire a ‘documentary’ dimension that reduces the distance between fiction and reality.

With this exhibition at MAMM the charismatic and workaholic Emmie America, now 25, sums up a particular stage in her work. Today the artist’s attention is increasingly focused on social documentary photography, performative art and experiments with various media. ‘It’s very easy to comply with demand and get stuck in one style. The important thing is to keep growing,’ says Emmie.