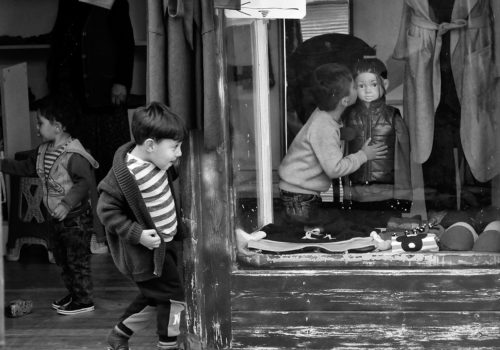 The Multimedia Art Museum, Moscow presents an exhibition by Boris Nazarenko, one of the most prominent representatives of contemporary street photography, known for his emotional and ironic images of everyday urban life.

Boris Nazarenko was born in 1950 in Omsk, to a family of engineers. He inherited his interest in photography from his parents: the starting point was a narrow-film camera with sliding lens that his father brought from Europe after the Second World War, and Nazarenko took his own first pictures with his mother’s Lubitel camera. He continued to use the Lubitel camera, as well as a Czech Flexaret camera, both designed for a square frame of 6×6 cm, until the 1980s and 1990s — according to the photographer, that’s how he got addicted to the square format and then organically entered the era of Instagram. In the third grade Nazarenko was given his own camera, a Smena-2, one of the most popular Soviet small-format devices. Back then the young photographer was preoccupied by formal experiments with various techniques, photo effects and printing methods.

From 1963 to 1965 Nazarenko attended evening courses at the Omsk School of Art. Painting and drawing classes exerted a strong influence on his photographic language, and the way he used composition of the frame and plastic form.

Nazarenko’s passion for photography developed in parallel with his scientific pursuits. After studying at the School of Physics and Mathematics, in 1967 he entered the Mathematics Department of Novosibirsk State University. He moved to Moscow in 1971 and continued his studies at the Faculty of Economic Cybernetics of the Sergo Ordzhonikidze Moscow Institute of Engineering and Economics, where he worked on artificial intelligence. This research practice developed Nazarenko’s special attention to detail, his ability to see the familiar in a new way.

In the wake of the economic crisis and the tense situation in the country during the early 1990s Nazarenko lost interest in photography. Since 2005 he has taken up photography again, and after experimenting with various genres he settled on street photography.

The exhibition presents examples of Nazarenko’s work over the last two decades.

The classic street photographer Elliott Erwitt, whom Nazarenko sees as one of the masters closest to him in spirit, believed that ‘photography is an art of observation. It has little to do with the things you see and everything to do with the way you see them’. This principle underlies Nazarenko’s photographic method. His pictures are the result of a clever game of imagination and observation. He brilliantly manages to foresee the onset and development of a story, anticipating the ‘decisive moment’ and capturing it in a split second in one frame.

This rare skill makes Nazarenko an outstanding master of spontaneous, unstaged photography. He calls his work ‘improvisations’. ‘I don’t think in series,’ says the author, ‘that’s the filmmaker’s job — I think in one frame, where everything begins and ends.’ Nazarenko prefers to work with black and white photography, believing that colour distracts from what is most important — the subject matter and direct emotions. He focuses on colourful places and characters, the relationships of the characters and their experiences, the random compositional rhymes and combinations of form that give rise to new visual and semantic connections. From the flow of everyday life he captures the anecdotal or dramatic mise-en-scènes that comprise everyday life in any city and any country. According to the photographer he finds it best to take pictures of his subjects in ordinary circumstances, when each of them can show their individuality. ‘I am interested in real life: no staging, no guile,’ says Nazarenko, ‘that is many times more interesting and fantastic than any fabrication.’

Boris Nazarenko has participated in numerous exhibitions at museums and galleries in Italy, Switzerland, the Czech Republic, Hungary and Russia. His photographs are in the collections of the State Russian Museum, the Multimedia Art Museum, Moscow, and galleries in Prague and Budapest. He lives in Moscow but is a frequent traveller, taking pictures all over the world.