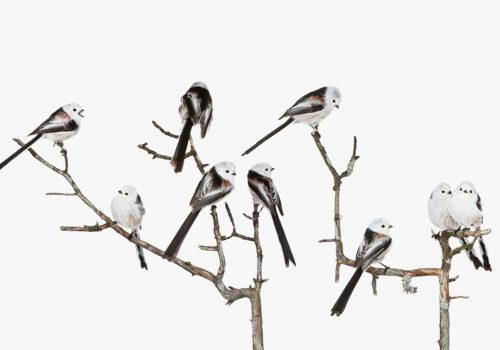 Focused on themes related to flora and fauna, the artistic approach of Finnish photographer Sanna Kannisto is inspired by both scientific research methods and art history, in a quest for a sense of the marvelous. In his work, man-made order and wildlife collide, offering viewers many possibilities for interpretation. Whether in the tropical forests of Latin America or in ornithological reserves in Europe, the artist observes the living, stages it and wonders about its fragility. His magnificent photographs of birds on a white background offer several levels of reading: documentary, scientific, aesthetic and ecological.

For more than twenty years, Sanna Kannisto left her native Finland to explore the fauna and flora of the tropical forests of Peru, Brazil, Guyana and Costa Rica. Over the course of these expeditions, she perfected her working method: a portable photography studio consisting of a kind of box made of semi-transparent fabric into which she introduced the elements that would constitute the staging of her subject. Working with scientists who capture animals to observe and analyze them, she introduces birds, bats, frogs, snakes or other insects into her box and observes them using her lens.

For the artist, visual contact with the animal is very important: “The gaze of the animal is a key element in my images, where I look at the bird and the bird looks at me. 1 Thus, she captures moments of life and communication, in images that at first glance seem frozen and almost unreal, as if they were stuffed animals or montages. Because for Kannisto, beyond the fact of producing an aesthetic image, she seeks the link with the living, with biological diversity, with the marvelous.

There is a theatricalization of nature in Kannisto, in the way she carefully chooses the accessories that will enhance her subject. The black curtain that frames certain images further accentuates this feeling of literal staging. “My photographs are linked to the tradition of set up photography and to the tradition of still life in the visual arts,” says the artist in the video presented in exhibition 2. This way of working also brings to mind the old drawings of ‘scientific observers, representing animals with selected elements of their surroundings. The artist recalls that photography has been put at the service of science since its appearance and plays on this association between science and culture.

Since 2014, Sanna Kannisto has gradually moved her field of work to Europe, observing migratory birds in Italy, Russia, Germany and Finland. At the Hanko Bird Sanctuary in southern Finland, she delights in watching the details and colors of birds ringed for science and borrowing them to create a stealthy, intense, and immortalized bond. She names this new series Local vernacular or local dialect, in reference to the song and movements of migratory birds.

Ecological concerns have been an integral part of Kannisto’s work, since her first trips to the Amazon in 1997. The oldest work in the exhibition, Palm Seedling, taken in 1998 and reproduced in 2020, shows the sandy and barren soil of part of the Peruvian rainforest that has been razed, leaving a desert where life once thrived. In Louis Carré’s room will also be exhibited the work Preserved Specimen of the Extinct Golden Toad (2006/2020), showing a species of toad that lived in Costa Rica, extinct since 1989.

The benevolent gaze of Sanna Kannisto is placed on the animals and plants that she handles and photographs with gentleness, wonder and a certain concern about their future.