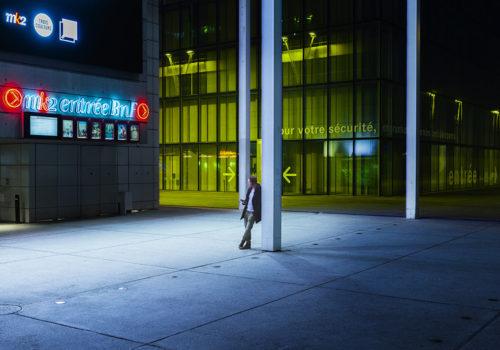 In his collection of drawings Un peu de Paris (2001) Sempé sketched Parisian scenes and places with tenderness, poetry and humour. The title of Éric Laforgue‘s new exhibition is a nod to and a tribute to the famous cartoonist.

Graphic decorations
The photographer has tightened the boundaries of his urban explorations to the 13th arrondissement, close to Ivry-sur-Seine where he lives. He strolls, day or night, in these new neighborhoods that he saw emerging from the ground twenty years ago. The Olympiades, the BNF and the Patay-Massena district erected above the railway tracks, constitute his playground. He is sensitive to the architectural lines of their buildings, their atmosphere, their lights, their residents too. He captures them, like fictional characters, in these graphic and cinematographic settings.

Movie scenes
Éric Laforgue has chosen a fixed focal length, 35 mm, which offers the perfect distance from his subjects: neither too close to respect them and preserve the mystery, nor too far to capture their silhouette, their humanity and scenarios arise in the spectator’s imagination. “I like the way men have taken over this space, the way they play with the lines, and the way they compose with their environment,” he says. To capture these moments of grace, he alternates between two methods. Sometimes, everything is there: the character, the decor and its light. His eye seizes them, the camera immortalizes them. Other times, the human is missing in a perfect scene. The photographer then waits until a body enters the scene. Like old-fashioned street photographers who worked with film, he does not shoot. Anxious to preserve the poetry of the moment, he prefers to wait for the perfect moment to press the shutter.

Éric Laforgue lives in the Paris region, he worked for many years in the 13th arrondissement in Paris.

He started photography as an autodidact after having studied science. A real trigger occurred when he discovered the work of the photographer Lucien Hervé. Inspired by “street photography”, in particular that of Saul Leiter, Eric Laforgue’s influences are also cinematographic and pictorial.

He is also pursuing work on portraits initiated by the “Internal Portraits” series.

His latest project “Our College Years” describes, through a series of diptychs, a class of teenagers caught at two periods of their lives. A first take when they entered 6th grade and the same students taken in 3rd grade when they left college.