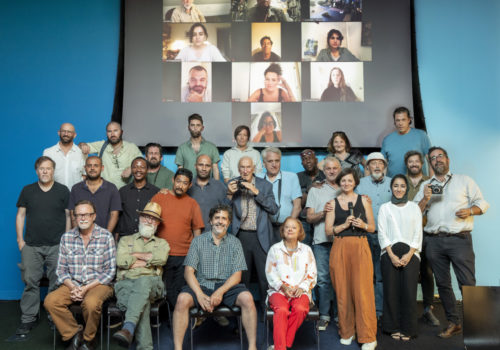 At Magnum’s AGM in New York this month, the agency announced three new members and welcomed its latest president amidst celebrations of its 75th anniversary.

New York is where it all started, according to Magnum Photos legend, when Robert Capa popped open a double-size champagne bottle to celebrate the birth of the new agency over lunch at the Museum of Modern Art in 1947.

And New York is where Magnum took its next steps 75 years later, with photographers, staff and guests gathering to celebrate the anniversary with a series of in-person events, including talks, parties, cinema screenings and a book fair.

The eight-day program culminated last weekend, running alongside Magnum’s Annual General Meeting (AGM), where one of three newly elected members – Cristina de Middel – also stepped up to become the next President, taking over from Olivia Arthur.

De Middel initially joined Magnum as a nominee in 2017, then became an associate in 2019. She came to worldwide attention in 2012 with the breakout success of her second book, The Afronauts, having previously worked for a decade as a photojournalist. She has subsequently published nine books, and shown her work around the world at venues including Rencontres d’Arles, Perth Center for Photography, Chobi Mela Festival, and the Museo del Prado.

“I am, of course, honored and also conscious of the responsibility,” says de Middel. “I have never been a president of anything before, but if hard work and respect for the role and the legacy of Magnum is what it takes, then I should be fine. I hope that I can continue the great work that the previous presidents have done, and that I manage to contribute with new ideas and enthusiasm for the group.”

Arthur, who has seen Magnum through a turbulent period, becoming president in 2020, during the pandemic, commented: “It has been an honor to serve the organization that I love as its president for the past two years and to be there as we celebrated our 75th anniversary. I am also delighted to hand the baton over to someone who I know will continue the mission to lead us with her energy and thoughtfulness. I am excited to see the next years unfold for the future of Magnum.”