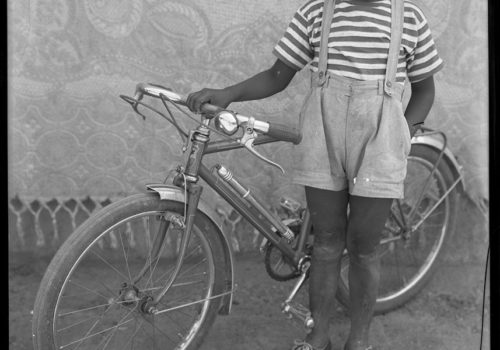 Worked and lived in Bamako. Died in 2001, Paris, France

Initially trained by his father to be a carpenter, Keïta’s career as a photographer was launched in 1935 by an uncle who gave him his first camera, a Kodak Brownie Flash, he had purchased during a trip to Senegal. In 1948 he opened his own studio in Bamako and he quickly built up a successful business. Whether photographing single individual, families, or professional associations, Keïta balanced a strict sense of formality with a remarkable level of intimacy with his subjects. Like many professional photographers, he furnished his studio with numerous props, from backdrops and costumes, to Vespas and luxury cars. He would renew these props every few years, which later allowed him to establish a chronology for his work.

Keïta commented on his studio practice, “It’s easy to take a photo, but what really made a difference was that I always knew how to find the right position, and I was never wrong. Their head slightly turned, a serious face, the position of the hands… I was capable of making someone look really good.” In 1962 the newly installed Socialist government made Keïta the official photographer; shortly thereafter he closed down his studio, although he remained active until his retirement in 1977. His archive of over 10,000 negatives was gradually brought to light in the early 1990s; Keïta has since achieved international recognition.

Born in 1908 in Saint-Louis of Senegal, Senegal

From the age of 12, Mama Casset learned photography with Oscar Lataque in Dakar. After his studies he was hired by Tennequin at the Photography Counter of the AOF before joining the French Air Force, for which he made several aerial photographies. At the end of World War II he opened his private studio « African Photo, in the Médina, Dakar.

Mama Casset does not limit himself to being the” trendy Studio” in Dakar, he also produces work that he qualified  as artistic , whose  muse and main model is his second wife. The very personal aesthetic of the artist will find a following: refined scenery, structured staging of the model, frequent use of straight lines, showcasing body ‘expression, hands’ position, tight framework.

He Became blind in 1980, and ceased his activity. A few years later his studio was completely destroyed by fire.