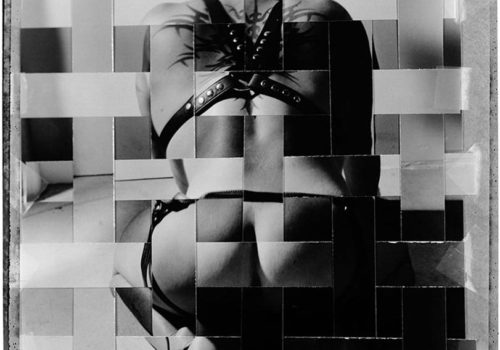 MONDO GALERIA presents as part of the festival MADO 2014 (Madrid Orgullo), a collective exhibit in which the history of male nude through the XXth and XXIst is exposed. From tabou to explicit, from scientific studies to artistic creation. The works of these contemporary photographers will be presented along with historic documents.

Nakedness is exciting, fascinating – but it can also be disturbing.

Kenneth Clark, the English art historian, made the distinction between ‘nude’ and ‘naked’ – the nude is posed, confident, contrived, ‘respectably’ rooted in art history; naked is to be without clothes – exposed, vulnerable – an embarrassment!? Especially the penis.

The selection of photographs here traces the change in society’s attitude to the naked male during the 20th/21st centuries – changes which mirror and reflect the place of homoerotic and same sex relationships. The American photographer Berenice Abbott said ‘Photography helps people to see’ – and as we look at the images, so we see how society has changed; and the images have challenged society to change.The process of male ‘nude’ to ‘naked’ men is the story of the homoerotic becoming open and mainstream; of gay moving from closet to establishment.

At the end of the 19th century, photographs of the nude male fell into three main categories – of models in various poses of use to artists – replacing the use of plaster casts and live models; the recording of tribal and non-european cultures; the increasing use for medical, scientific and criminal purposes – so wounded soldiers were photographed in the American Civil war, criminals were recorded in ‘mug shots’, and the work of Huxley, Darwin and others led to the use of photography in the understanding of human/ animal evolution – Muybridge developed a camera to record human locomotion. This was the first time images of the nude male were widely available to the general public. Photography was used and valued for recording clarity of detail – things as they ‘are’.

The two World Wars brought huge changes in society – no longer was the male nude inspired by the classical – the interwar period saw the cult of physical fitness, sun worship and naturalism; the huge numbers of servicemen brought together led to male companionship and bonding and there was a general ‘loosening’ of morals. After 1918 male nudes were largely photographed in a ‘classical’ setting – in Sicily by Pluschow, von Gloeden and in Germany by Theodore Hey – with laurel wreaths and columns, grapes and urns – this trend continued in the 1930’s with the work of the fashion photographers McBean, Platt Lynes, Herbert List and others whose male nudes were made for their own pleasure and for their friends – most remained unpublished until the later 20th century. They destroyed many of the negatives for fear of prosecution.

The 1940’s and 50’s saw the rise of commercial studios meeting the need for ‘homoerotic’ photographs – ‘beefcake’ and ‘physique’ photographs – but these were business rather than art – they were largely contrived studio pictures – in small format so that they could easily be sent through the post without attracting the attention of the authorities. Blatant sexual activity was illegal as were erect or naked penises. Images largely conformed to the bodybuilder ideal – using wrestling and athletic poses to legitimise physical intimacy; the use of ‘classical’ accessories continued – columns, masks, elaborate sets; stereo types were popular – cowboys, uniforms, mechanics; ropes, chains and other ‘props’ provided suggestive scenarios. Athletic Model Guild, Bruce of LA, Lon of NY, Western Photography Guild were some of the best known in the US. Later the ‘hollywood pin up’ was a popular theme/ model – Colt Studio/ Jim French was a leading name here. Images from this period were ‘propaganda’ for the nascent ‘gay rights’ movement. The images suggested and embodied an uncomplicated exaggerated male sexuality.

The 1960’s saw society in ferment – huge changes gave rise to a ‘counter culture’ in both Europe and the United States – the anti Vietnam war protests in 1964; Civil Rights 1965 and Women’s Rights and in 1969 the Stonewall Riots gave birth explicitly to the Gay Rights movement. In 1968 the Supreme Court in the US passed the ruling that nudity per se was not obscene – and this reduced the number of prosecutions of those producing and sending nude male photographs through the post – and the ‘pouch’ was no longer obligatory for naked males.

In 1978 the Marcus Pfeifer Gallery in NY held the first show of male nudes – the critic Rene Ricard wrote – ‘Don’t men’s genitals have a certain ….. decorative look, like an accessory thrown in to be amusing?’ The penis is always the problem.

The Gay Rights movement and the higher profile and acceptance of the homosexual lifestyle meant that naked men became mainstream – the homoerotic was in business – fashionably selling underwear and perfume – Bruce Weber commented “ When I had my first studio in NYC I was asked by Calvin Klein to photograph his underwear campaign. He asked me ‘Where do you want to go?’ I thought … and then it hit me, Herbert List and Santorini.”!

An homage to the past! And a nod to an early photographer of the homoerotic.

The contemporary photographers featured in this show celebrate the male nude as naked men – their work is to be enjoyed on a sensual as well artistic level – they come from different countries, different continents and are of differing ages and backgrounds – their common ground is a delight in and celebration of the male body and our honest and open desire and enjoyment in that. Now to be ‘queer’ or ‘gay’ is no longer illegal, it may even be increasingly accepted in main stream society and what was once hidden and furtive can now be openly enjoyed, accepted and celebrated. Here and now in Madrid.

Ron Howell, curator of the exhibition