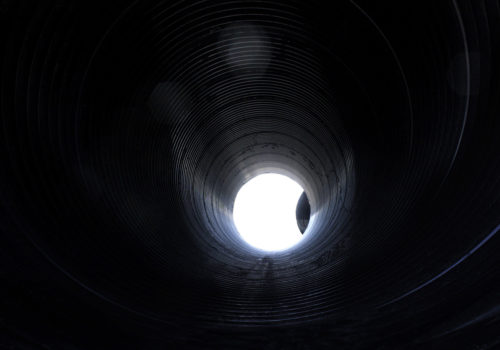 Le Serpent Noir, an unprecedented project by Cécile Hartmann presented to the public at MABA in Nogent-sur-Marne until July 18, 2021, revolves around the metaphor of the black snake: the giant Keystone pipeline that transports more than 700,000 barrels of unclean tailings, from surface mining in Alberta to Indian reservations, contaminating lands and water supplies and causing unprecedented ecological damage.

This pipeline, supported during the Trump era, saw construction of the last sections halted in the early days of Biden’s arrival to the presidency of the United States, blowing a breath of new hope.

A film, Le Serpent Noir (2018 – 2020), follows the invisible flow of the pipeline to the boreal forest and forms the heart of the exhibition, from which the photographs, sculptural element, wall painting and silkscreen prints spread out.

Four years after the struggles of Standing Rock and Sacred Stones, Cécile Hartmann shares the archive of this “time in suspense”, in this episode of contemporary history where struggles have already given way to the first alterations of the landscape and forms of life, also making visible the first signs of a decline in the fossil fuel industry. The artist delivers a story, without a human figure, where documentary images mingle with the mental image, a tangle of temporalities and spaces in a dive into the heart of darkness. Darkness, perceived for its creative potential as destructive, is that in which the world was plunged “in the beginning when there was neither moon nor star”; they are here the place of specters, of emergence and disappearance. They also become the counterpoint to the idealized vision of the Enlightenment and Modernity (Christopher Columbus never discovered America) and the resulting ecological impasse (the appropriation and depletion of natural resources).

Cécile Hartmann’s work always bears the trace of latent, underground events that appear or (re) appear on the surface of the works presented. The film Le Serpent Noir and its ramifications also stand on these fragile interstices between visibility and invisibility, expressible and unspeakable, reality and fiction, organic and inorganic, strength and instability.

The memory – like the news – of the violence exerted as much against nature as against the Amerindian community, thus regularly appears in the works of the exhibition, through a film sequence, a textual element, ‘a music … They are the clues, the appearances of these events.

Therefore, the enumeration of the names of the places crossed also acts as a phantasmic projection of natural landscapes, of territories belonging to Indian “houses” or of infamous battles. The text creates an image here, in the same way as the related notions – in what takes the radicalness of its form from the militant poster – engage the viewer to think about the clashes between economy, politics, history and ecology.

Constantly lowering her gaze to bring it closer to the ground, to “primitive” clay, the artist is interested in these different strata, layers of time and accumulated memories. Her vision thus constantly shifts from the scale of the global to the scale of the fragment, from a panoramic vision of the landscape to a vision plunged into the heart of the earth, in an introspective movement of the order of the psychoanalytic.

Tracing lines between romanticism, minimalism and activism, Le Serpent Noir is as much the archeology of a devastated and devastating present as it is a prophetic vision of a future where chaos and destruction could become forces of regeneration if, however, a new cycle were to begin.

Le Serpent Noir will open to the public as soon as government guidelines allow it and will be on display until July 18, 2021.