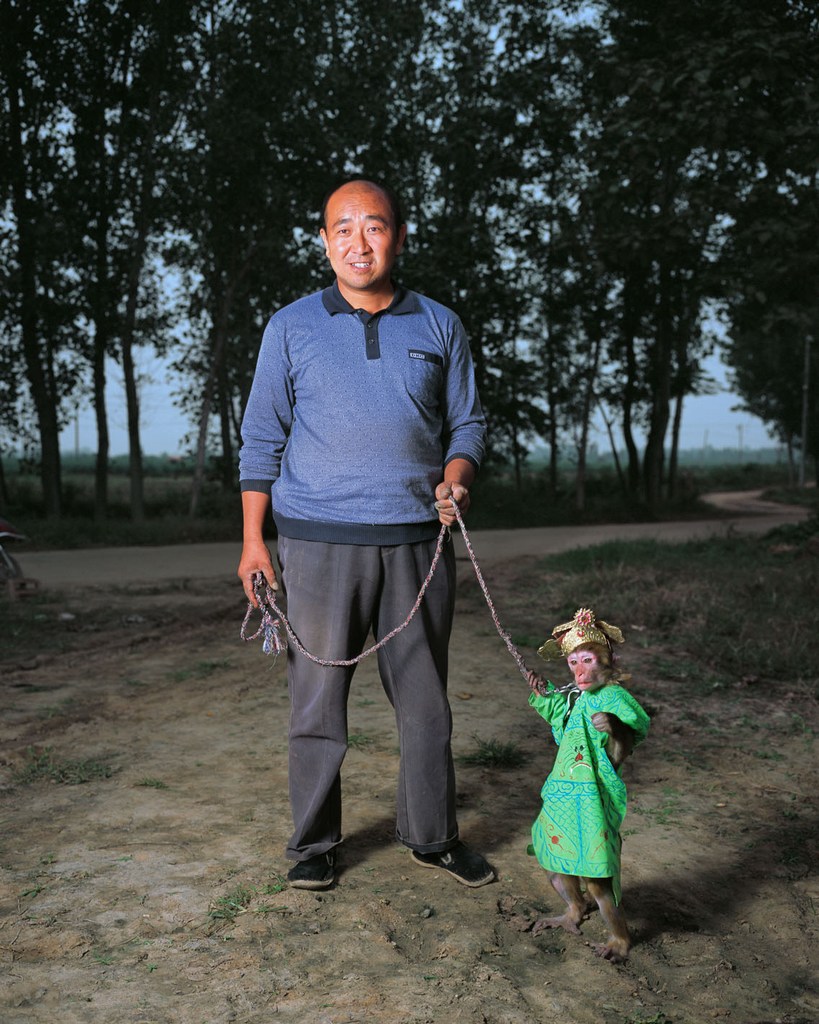 The Modern-Day Monkey Pilgrim – Foreword by Jean Loh, Curator of the exhibition

Since my childhood I have always heard that Man descended from the Monkey. No need to study Darwin, a few trips to the zoo sufficed to convince me that there was not much difference between the games of squabbling monkeys and those of my classmates in the school playground. At eleven years old I devoured a book that I found on my father’s bookshelf “Journey to the West”, whose character, the Monkey Pilgrim—Sun Wukong—long fascinated me by his extraordinary powers and burlesque antics. Later, as a serious yoga student, I discovered the epic Ramayana and Hanuman, the monkey god, through whom I recognized the “ancestor” of Sun Wukong. Indeed both share that courage and sense of daring when confronting the impossible, what American writer Tom Wolfe called “the Right Stuff”; for evidence, Man’s conquest of space would not have been possible without the monkey.

Besides zoos, space laboratories and test centers, the interaction between man and monkey started very early on, as far back as the civilization of Ancient Egypt and the Roman circuses that saw the emergence of bear trainers and monkey trainers. The tradition in China dates back to the Han Dynasty. Whether it was an influence from India or Egypt via Iran, we have no proof. But this fabulous Monkey Pilgrim, Sun Wukong, invented by the author Wu Cheng’en (of the Ming Dynasty 1368-1644), accompanied the monk Tripitaka (character of the Tang Dynasty who actually lived, from 602 to 664) to India to collect Buddhist sutras back to China for translation, in a journey rich in fantastic adventures. Fiction or reality, it is certain that more than with any other animals, domestication and taming of monkeys have always been much easier because of the proximity and similarities between man and monkey and because of the empathy monkeys generate in the popular imagination.

It is precisely this proximity and empathy, felt by the photographer Ma Hongjie upon his first encounter with a monkey trainer in the streets of Luoyang, that prompted him to start an investigation lasting over twelve years on this remarkable partnership of street entertainers formed by man and animal, as they say in Chinese “Shua Hou Ren” = man who plays with monkey.

From the moment Ma Hongjie cracked open the very tightly fenced-off circle of monkey breeders and trainers, from the year 2002 to 2014, he has built up quasi family bonds with them, traveling together as stowaways in freight trains, sleeping in the open, sharing their dry bread (mantou) or meager noodle soup, bailing them out from police stations with his press card. He photographed without artifice the unadorned reality of these pilgrims of modern times, their on-the-road trials, capturing not only their busking, but also their intimacy, like that of their children raised together with baby monkeys, nursed by the same mothers, the weddings and burials in their villages. These twelve years of tracking the monkey trainers’ tribulations are like a short movie narrating the mad decade of miraculous growth in China leading up to “normalization”, brought on by a relentless urbanization that further reduces the living space of these farmers cum monkey performers. The coup de grace came when four monkey trainers were (wrongly) accused of wildlife trafficking, arrested and detained causing the death of one of their monkeys; their subsequent trial and final rehabilitation; a news story that blasted the headlines of newspapers and wildly ricocheted on social networks. That unwanted publicity basically spelled the end of this ancestral profession of monkey trainers, those few still left in the provinces of Anhui and Henan. This craft is slowly but dying for lack of successors, and simply because of its anachronistic nature. The trainers and performers have been progressively converted to breeding farm to supply monkeys to zoos and laboratories.

In concluding his own long journey with the Monkey Pilgrims, perhaps as a gesture to restore their dignity, Ma Hongjie made a series of portraits of these odd yet complicit partners in crime, having trainer and monkey posed side by side, in the fields, in the dimming sunset light, signifying the twilight of the last monkey trainers, on the brink of China’s entry into the rank of the world’s paramount and wealthiest modern industrialized nation. What is the monkey saying inside his little head, behind his opera mask and under his stage dress? Isn’t he saying: “Master, when are we going back into town? When are we going to hop on a freight train again, and go check out the warmer southern countries, to perform our comedy acts, and collect our coins even though most are fake?”