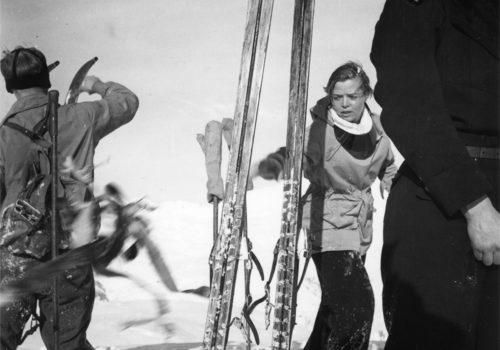 The exhibition project sets out to shed light on the rich and versatile production of Charlotte Perriand, the famous French designer and photographer, collaborator and friend of Le Corbusier and other great names of her time, placing her photographic production of the 1930s in dialogue with a selection of the iconic furniture items produced exclusively by Cassina.

Charlotte Perriand was a complex and eclectic figure, a woman whose path crossed the entire 20th century with great impetus and curiosity, fully experiencing the onset of industrial culture and thus of modernity. A child of the avant-garde of her time, she stood out by virtue of her sharp intelligence, her non-conformism and the originality of her thinking.

A pioneer of modernism, she experimented with a great plurality of languages (architecture, design, urban planning, photography, politics and civil rights), going beyond conventions and opening up her mind to new ways of approaching life, form and space. A tireless traveller, she worked extensively in the Far East, turning her encounter with another culture into an opportunity to enhance her own creativity, to learn new ways of imagining, designing and – somewhat ahead of her time – paving the way to multiculturalism.

The exhibition held in the spaces of M77 is split up by thematic areas, aiming to offer precise acknowledgement of the main aspects characterising Charlotte Perriand’s work and sensibility.

The first part of the exhibition features a selection of photographs focusing on the mountains – an environment dear to the artist and a great source of inspiration – including a life-size portrait of Perriand herself in her ski gear. This is followed by two portraits of her most famous friends, Le Corbusier and Fernand Léger, on either side of the imposing Parthenon, shot during her trip to Athens for an architecture convention in 1933. The exhibition continues with the series she called Art Brut (unrelated to the so-called outsider art current), in which a number of natural objet-trouvés, often stumbled upon on the beaches of Normandy, are photographed with a still-life approach, emerging from beneath the artist’s gaze as genuine works of art. The overview on the ground floor level comes to an end with two large photographs of a block of ice that Perriand transforms into a symbol and metaphor, raising it in her hands; in the middle is the iconic portrait of a shirtless Perriand in a victorious pose on a peak in the Savoie mountains.

The first floor brings the itinerary to a close with a selection of seascapes (boats, nets and beach scenes) and cityscapes (the metro, various glimpses of everyday life) captured in Croatia, England, Paris and Japan. Shots everywhere, jotted down as visual notes with which to feed her all-round creativity. Indeed, the shapes of objects and structures would serve as a source of inspiration for the forms of her furniture and architecture alike.

The exhibition also presents Créer l’habitat au XXe Siecle, a documentary film by Jacques Barsac (writer, director and husband of her daughter Pernette), to Italian audiences for the first time. The video was made in 1985 with the participation of the then eighty-year-old Charlotte, who over fifty-seven minutes retraces her career, her life, her struggles and her achievements. The film features a great number of period documents, archive images, drawings, plans, furniture and photographs, along with other materials that help to contextualise the exceptional tale of an exceptional woman.

Charlotte Perriand was born in Paris on 24 October 1903.

She studied at the Union Centrale des Arts Décoratifs (UCAD) in Paris between 1921 and 1925. At the age of twenty, she decided to become an architect: a profession considered an exclusively male domain at the time. After obtaining a diploma in Interior Design in 1925, she followed the research poetics of the Bauhaus, rejecting traditional decorative canons and embracing the use of new industrial materials.

In 1927, she began working with the architects Le Corbusier and Pierre Jeanneret at the famous atelier 35 in rue de Sèvres, Paris. It was in this period that she began her intense photographic production. In 1928, together with Herbst, Bourgeois, Fouquet, Sandoz and Puiforcat, she formed the avant-garde group ‘L’unité de choc’, with which she exhibited her Salle à manger: designed in 1927 at the Salon des Artistes Décorateurs. Two years later, followed by her avant-garde group, she founded the UAM (‘Union des Artistes Modernes’). In 1930 she met Walter Gropius and Fernand Léger, with whom she established a close relationship of both friendship and artistic collaboration.

Her conception of living was always characterised by the need to combine her technical and scientific knowledge of materials in relation to the space and the way of occupying it and experiencing it. In 1932, she abandoned her studio in Place Saint Sulpice and moved to Montparnasse. Between 1933 and 1937, she continued her research into experimental photography, with the Art Brut series and Objets Trouvés, which she produced both in situ and in her studio. In the same period, during the Spanish Civil War, she took part in demonstrations alongside the Republicans, participating in the intellectual circles of the Communist Party, where she met Juan Mirò, Pablo Picasso, André Malraux, Léger himself and Blaise Cendrars.

After a ten-year collaboration with Le Corbusier and Pierre Jeanneret, with whom she put her name to various major pieces of furniture, she left the studio in March 1937. In 1940 she was invited by the Japanese government as a consultant for the national production of industrial design. The experience in Japan greatly influenced her thinking and way of working; Perriand thus sought to apply new industrial forms to the Japanese national traditions. In 1943 she moved to Indochina, and in May of the same year, she married Jacques Martin, with whom she had a daughter, Pernette, now head of the Archives Charlotte Perriand.

She returned to Paris in 1946, and in 1951 she headed the French delegation at the ninth Milan Triennale, titled ‘Furniture and Decoration’. The furniture designed by Le Corbusier–Jeanneret–Perriand was later reissued in 1964 by the Italian company Cassina.

Charlotte Perriand. The Avant-Garde is Female will be open to the public until Sunday 25 September 2022.
Exhibition curated by Enrica Viganò