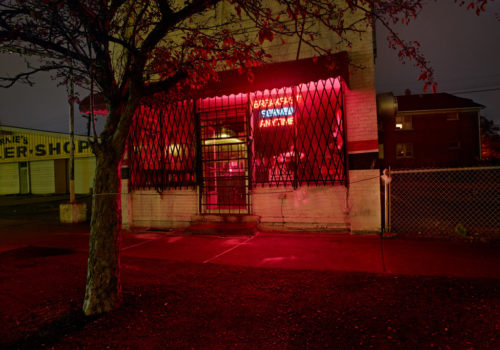 I have been a roamer of limbo regions, one of our last frontiers—places that seem unloved and overlooked, cracks in the urban façade. When I discover a site that attracts me, I return to it at dusk. In this liminal period, natural light gives way to streetlight, moonlight, window light, as well as advertisement and surveillance lighting.

Lately, however, I’ve been lured back to the central areas of cities, where economic turmoil has produced its own gaps in the façade—vacant stores whose glowing windows can resemble a Rothko painting. My project “Vacancy” pursues this contrast between aesthetic perception and the subtext of economic distress, a contrast that evokes a disquieting beauty.

I continue to photograph cities at dawn or dusk, transitional times that underscore the shifting and uneasy nature of this era. However, my focus is on the patches of emptiness that honeycomb the city center. I have also been exploring the use of isolated, ghosted figures to intensify the aura of absence and extending the project beyond shop windows to include other imaginative examples of vacancy, such as empty billboards caught on the fly from moving trains and buses.

Fine-art photographer Lynn Saville was educated at Duke University and Pratt Institute. Saville specializes in photographing both cities and rural settings at twilight and dawn, or as she describes it, “the boundary times between night and day.”
Her photographs are published in two monographs: Acquainted With the Night (Rizzoli, 1997) and Night/Shift (Random House/Monacelli, 2009). Her work is represented by the Yancey Richardson Gallery in New York and is in the permanent art collections of major museums, corporations, and individuals. She lives in New York City with her husband, the poet Philip Fried.