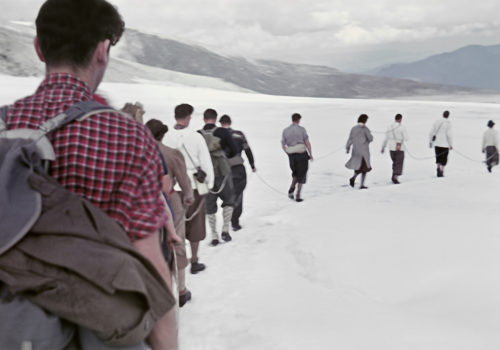 The exhibition presented at the Abbaye de Jumièges is part of the second edition of the Lumières Nordiques event intended to highlight contemporary photographic creation in the Nordic countries. Program which will be deployed until the autumn 2023 in several museums and art centers located in Normandy. After the Jumièges exhibition devoted to eight Danish artists and produced by the Department of Seine-Maritime, Northern Lights will move to the Matmut Contemporary Art Center in Saint-Pierre-de-Varengeville, with the presentation of photographs and videos of an Estonian artist made in Iceland: Anna Lehespalu. Then the Alexis de Tocqueville Library in Caen will host the Swedish director of animated films, Niki Lindroth von Bahr, a project carried out in association with the Swedish Institute in Paris. The Rouen Museum of Fine Arts will then show three Norwegian photographers: Marie Sjøvold, Terje Abusdal and Ole Marius Joergensen. Finally, the Fisheries Museum in Fécamp will offer landscapes by Finnish artist Tiina Itkonen.

The sixty works hanging in Jumièges are an opportunity to discover abundant contemporary creations in Denmark. Photography is associated with a wide range of projects: works with a documentary profile alongside original art and conceptual adventures. Nature occupies a large place: exploration of the mineral and vegetable world, contemplation of light. The artists engage in a reflection on time, question their perception of the world; they digitally rework images or reappropriate old processes, sometimes even operating without resorting to the camera. But beyond this diversity of approaches and commitments, the works also come to weave links with the place which welcomes them (stones of the monument, trees of the park, lapidaries of the abbey house), as well as with the historical heritage and artistic region of Normandy where the Jumièges site is located.

Among the artists exhibited, Joakim Eskildsen shows a set of photographs taken in 2008 in Skagen, a territory located in the far north of Denmark and renowned for the particular quality of light that illuminates the landscape by the sea. A light, but also a range of colors that inspired many painters, including Peder Sevrin Krøyer, who forged ties with the French Impressionists. Joakim Eskildsen, whose technique and “palette” are immediately recognizable, could not help but be seduced by the visual atmosphere of the place; and he widened his approach on the documentary register to the urban landscape as well as to scenes of daily life.

Ebbe Stub Wittrup is the author of a series entitled “Presumed Reality” (2007 – 2013) which brings together photographs of excursion scenes in mountain landscapes in Norway and Switzerland. These scenes come from slides dating from the 1950s that Ebbe Stub Wittrup found at flea markets: anonymous author(s) and groups of walkers whose motivations are not precisely identifiable. Whatever, the artist’s project is elsewhere: he reworked these shots by very subtly thwarting the depth of field and by focusing on certain details. So that it leads the spectator to wonder about the way our eye perceives reality and stops on some of the elements that compose it.

Joakim Eskildsen is represented by the Polka gallery in France, Ebbe Stub Wittrup by the Martin Asbæk gallery in Denmark.