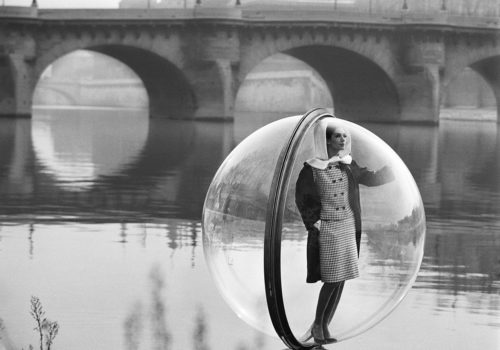 Here it is with the quotes that Melvin himself added.

The iconic Bubbles series brought worldwide fame to the then 30-year-old Sokolsky. Back in 1963, the young Melvin Sokolsky created an unprecedented series of photographs with models hovering over the streets of Paris in giant transparent spheres. Inspired by Hieronymus Bosch’s Garden of Earthly Delights, Sokolsky’s series combines surrealism with the world of haute couture, and also street photography in the fashion industry, which was becoming increasingly popular at the time. The main image of the series, Bubble on the Seine, 1963 captured the French model Simone D’Aillencourt in a haute couture suit frozen within a Plexiglass sphere over the smooth Seine. It was this photograph that became one of the most influential and iconic fashion images to go down in history. “The art director of Harper’s Bazaar, Henry Wolf, gave me complete conceptual freedom at the time. He was only interested in my personal, artistic vision. The main thing was for people to look at my work and say – that’s a Sokolsky,” he recalls.

Glimpses of surrealism in Sokolsky’s work are also found in his 1963 series with giant pieces of furniture. To photograph the models, an ordinary chair and table from Melvin’s mother’s kitchen were scaled up multiple times: “It was real magic to see the graceful figures of the models on this huge chair,” he says.

Two years after the legendary Bubbles series, in 1965, in Paris’ Saint Regis, Sokolsky photographed the American model and actress Dorothy McGowan levitating in urban scenery wearing dresses by DIOR and BALMAIN. In the shoots, McGowan, who was a muse of Richard Avedon, Irving Penn and William Klein, was suspended in a special corset with rings through which thin steel cables were passed, allowing assistants to maneuver her position in the air. “There is no such thing as impossible for Melvin when he has an idea,” McGowan once said.

I have always been fascinated by the way light can change the mood and meaning of a situation. As a boy, I remember my mother lighting a candle after sunset and the excitement that I felt when the mood of the room suddenly changed, bathing her in the warm, gentle light. I would venture to say the success of an image is based on the harmony between the idea and the lighting. There is a right light for everything. I do more lighting in the twilight of waking up than when I’m taking pictures. A rose, freshly observed, is sure to change the face of photography. Ideas are not digital. – Melvin Sokolsky

Next to my bed I keep a notebook that I write in sometimes while I’m half-awake, early in the morning, when a dream has insinuated a place or world I have never visited or seen. With my eyes closed, I scribble into the notebook and then go back to sleep. – Melvin Sokolsky

I have always been attracted to everything nature has to offer. I cannot think of any plant, animal, or creature that inhabits this planet that has not fascinated me. I have never thought of any being in the universe as superior to another. There is no living thing on earth that I have seen that is more or less beautiful than another, though it is true that I am attracted to some of the inhabitants on Earth more than others. As a photographer, I indulge my affinities until I am ready to move on and explore new challenges because I have visually exhausted my vision on a given subject. I believe personal affinities are genetic idiosyncrasies that are unique to each individual. In my life, indulging my vision has brought many surprises that I would have never thought of consciously. It is this chemistry that I believe is the creative force in all of us. – Melvin Sokolsky

When we look at an image that has a unique presence, the usual question is ‘How was it made?’ I am less interested in the how and much more interested in the what that inspired the image. Many of the turn-of-the-century masters went into the darkroom and coated their own glass plates in order to create a personal palette. Today, most photographers are limited to various manufactured films that I characterize as the emulsion of the day. When photographers gave up making their own film emulsions and embraced commercially manufactured films, the palette of some of the greatest image makers had become somewhat standardized at best. Even Steichen no longer looked like Steichen. I have always been interested in the palette of my images and have experimented with many filmstocks and techniques to create a personal palette. I have recently embraced many of the productive tools that have evolved with the computer and in the print-making arts. I have no doubt these new tools will aid photographers in the creation of personal images. Now I do not have to accept the emulsions of the day such as Velvia or Provia, when I can create Melvia on the computer. – Melvin Sokolsky

I believe taking someone’s portrait is an unspoken conversation in a shared space where the sitter and the maker reveal their being in a kind of silent dance of escalating expectation. When the fascination of the maker and the sitter inspires empathy or antipathy, the portrait may be enlightening. It is the mission of the viewer to decide if the resulting image is transcendent. We look at each other and dream about each other, and those dreams never ever meet except in the photograph. – Melvin Sokolsky

I have always loved telling stories. Early in my career, I found myself compelled to tell stories with my pictures. Stories about people who breathe and feel and suffer and dream. Stories that explore and create different worlds within the world we all live in. – Melvin Sokolsky

Reflecting on the past five years at the Bazaar, I came to the conclusion that I wanted to spend more time exploring simple themes. I wanted a break from the complex collaboration it took to shoot ideas that demanded complicated communication with many crew members. I wanted to explore how gesture influenced the psychological being of a model on a simple background and could be interpreted as a personal signature just as interesting as any of my more elaborate ideas. I have never been able to escape the allure of a new tool or idea that could enhance or change the look of an image. I came up with an idea that I called the slowdown strobe. I developed a condenser unit that connected between the light and the strobe pack and slowed the lights down to 1/15 of a second. The result was that hand gestures and movement were blurred, leaving the rest of the image quite sharp. The look was quite different than shooting at a slow shutter speed in daylight. I was pleased with the result; the gesture revealed the spirit of both the performers and the fashion designers of the clothes. The first half of 1965 Paris Collections was shot in the studio and the second part on location with Dorothea flying above the rooftops of Paris. – Melvin Sokolsky