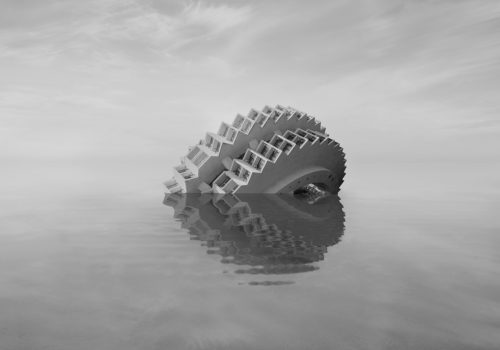 The Lumiere Gallery on Bolshaya Polyanka opened 2022 exhibition year with a solo show by the internationally renowned visual artist Danila Tkachenko. The project is based on his new series Planetarium (2020), Drowned (2021) and Shoal (2021), on which the author has been working in recent years. Just like in his famous projects Restricted Areas (2015), Lost Horizon (2016) and Motherland (2017), the Russian artist, winner of the World Press Photo international photojournalism competition, continues toexplore the topic of the boundaries of historical memory with photographic documentation.

The works by Danila Tkachenko are the soundless scream, a cold-blooded metaphor for a wounded condition of Soviet utopia. Yet they do not take a form of a social gesture but rather show the viewer an additional dimension of Russian realities where the man had left the nature out and the nature simultaneously had left the man.

Danila Tkachenko travels around Russia and other countries of the former Eastern Bloc looking for traces of the Soviet utopia — like fragments of the past — in contemporary everyday life. Tkachenko’s statement: “Ghosts do not live in time but in a space that continues to exist filled with new life,” reflects his current artistic search.

The Shoal project is based on photographs of typical residential buildings, abandoned construction sites, sports fields, garages, fences and other objects that embody the everyday reality of the countries of the former USSR. Danila Tkachenko set the details of the resulting images at the bottom of the shallow Aral Sea. According to the author, this is an attempt to separate the ghostly space from contemporary realities, moving it to a place of “nowhere”, namely to the bottom of the sea, which has disappeared by 90%. Once the fourth largest in the world, the Aral Sea fell victim to the utopian regime and disappeared with it, leaving behind an empty place.

The series Drowned continues reflections on the idea of a non-existent place and was made by the artist in the same location. Traveling through the territories of the former socialist countries, Tkachenko photographed the iconic symbols of the architecture of Soviet modernism and installed fragments of the resulting images on the shallows of the Aral Sea. This series became a symbolic funeral for the architecture of the unfulfilled future that came after the collapse of political utopias.

The series Planetarium (2020) explores the phenomenon of internal colonisation in Russia through the lens of bland abandoned cities in Russia’s Far North. In the 1930s and 1940sthe USSR began an active settlement and industrial development of the Arctic. Nonetheless the projects did not turn out to be successful. In the seemingly endless fight between a permafrost and a human no one became a winner. “These cities, created by the totalitarian will and the regime’s need for resources, were built by the hands of prisoners in permafrost conditions. Using portable flashes, I turn on the lights in the empty apartments, reminding of the lives devoted to the implementation of a totalitarian utopia,” explains the artist.

In his works Danila Tkachenko uses the typology format which has its origins in the Düsseldorf School of Photography. Despite the seeming formality of the method in each of his projects Tkachenko always proceeds from the idea to show the destruction of the illusion for the ​​great empire.

Gallery Lumiere will place 30 author’s prints which will reveal the idea of ​​these series from February 11th. As is customary in the Gallery, on Fridays and Saturdays the curators will be able to tell in detail about the work on the project, Tkachenko’s artistic work and the development of the Russian photographic school over the past 100 years on the basis of an extensive collection presented in the building at Bolshaya Polyanka, 61, bld. 1.

Danila Tkachenko is a visual artist working with photography, born in1989 in Moscow. He started his career as a news photographer but having become disillusioned with the profession, he began studying at the Moscow School of Photography and Multimedia. A. Rodchenko (2011 — 2014) in the studio of the artist Valery Nistratov.