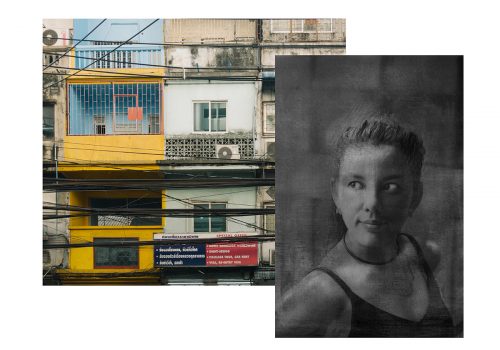 “Luk khrueng”. Behind this curious word, hides a social phenomenon which climaxed in Thailand in the 2000s. The luk khruengs, or literally translated as the “half-children”, are born from one Thai parent, and the other one farang (foreigner).

Aline Deschamps, a French-Thai photographer, decides to return to Thailand to capture and interview her fellow luk khruengs about their construction of identity : How does it feel when the word you’re called, literally means « half-child » in Thai ? And how do you navigate between multi-cultural backgrounds ?

Mixity is a universal subject in our globalized world. But in the Thai Kingdom it has an ironic turnout. Back in the 60s, 70s, American GIs arrived on the Thai shores during the Vietnam War, and many luk khruengs were considered as children of the prostitution, and therefore put at the margins of the very stratified Thai society.

With the boom of globalisation and the Western standardisation of beauty, these outsiders finally took revenge in Thailand : mixed-children became a trend, and sometimes even, a social status. In the last thirty years, luk khruengs have blossomed in the country. Some were casted in the advertisement industry before they even asked for it, people would chase them off the streets – just to be sure of their white skin and light hair -, and finally they became this social phenomenon that is still today overflowing the Thai media and the entertainment world.

By juxtaposing black and white portraits and colourful images of Thailand, Aline translates this dichotomy of the Thai society : in between fantasy and rejection. On one side they are praised and over-represented in the show-business, and on the other side they are still regarded as the “other”, as a “half”. As one of her subjects testifies “though I live in Bangkok and speak fluently Thai, random people still ask for my Thai ID to prove my Thainess”.

Aline purposely captures portraits of mixed-Thais from diverse backgrounds, in order to deconstruct the stigmas attached to them. She delivers testimonies from the outcasts : the ones who feel like they are not “luk khrueng” because they don’t have this “beautiful western face” seen on the TV, the ones who are from Isaan (Thailand’s northeastern region) and feel they need to justify they are not the result of prostitution, the ones who have to confront every-day racism because of their skin colour, but also the ones who make of their difference a strength and believe that Thailand is turning its discriminatory page and is accepting more dark-skinned people.

If the subjects are often portrayed as lonesome, contemplative, and afloat it is only the photographer’s visual interpretation of the testimonies shared with her. Each one of the luk khruengs delivers a personal perspective on his construction of identity, and each of them is moving by its sincerity. This intimate dimension is translated into a more imaginary and immersive  form through the use of Augmented Reality. A play with technology to embrace new forms of story-telling.
What the viewer grasps, in between the lines, is a reflection of contemporary Thailand in its social dynamics. How the luk khruengs are perceived or perceive themselves is only the result of structural processes which include social stratification, nationalism and beauty standardization, all hinted in Aline’s images.

“Luk Khrueng Generation” is a dreamlike invitation to the earnest construction and deconstruction of identity.

An exhibition supported by Galleries Night Bangkok and Project 189.