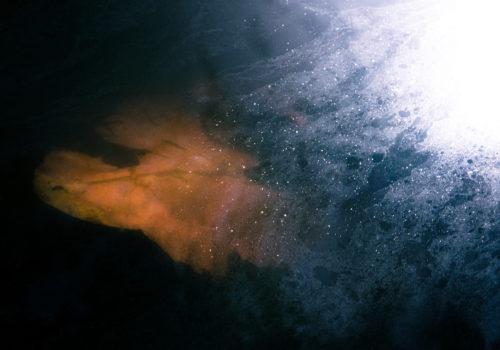 Où dorment les étoiles – Where stars are sleeping – immerses us in the bewitching and intoxicating dream of water; the aqueous matter is omnipresent: at the same time present and absent. The gaze pierces her without limit. It is a journey into oblivion and the unknown that is offered to us; An immense and disproportionate space in which the unsuspected spectacle of nature takes place. It is the story of his escape that I am telling.

Water is as vital as it is destructive, it constitutes a danger yet in danger. Its fragile balance is threatened and threatening. The water suggests an impression of death and latent life. The plant takes refuge in this aqueous element, thus detaching itself from a space-time condition of which humans are gradually depriving it: I am talking here, among other things, of global warming and deforestation. Escaping one’s destiny comes from an awareness of death that nature has very often been confronted with, falling into oblivion, into eternal rest even though we know it is ephemeral. Plants are conscious of death, of their own death. They hide underwater to infuse themselves with a sense of frozen life, however fleeting that feeling may be.

This depth, this dark character where the light seems to be diluted, we find them at the antipodes of water and space, of fullness and emptiness, of matter and antimatter. They face each other. Water is the material allowing this extraordinary encounter.

The figure of Ophelia from The Tragedy of Hamlet evokes an absence, an oblivion. His body lies vacant on the water of the river. This vision offers a moment, a break, a poetic and melancholy breath. Both beautiful and sad, an ambivalence between life and death.

Ophélie exudes a feeling of guilt, of suffering linked to her madness: the torment of the soul is appeased by the tranquility of the water. His death on the waters, which we associate with the persistence of nature through this photographic series, would refer directly to a return to life. Water momentarily keeps this body alive and resplendent and keeps this nature alive.

It is an illumination: this beauty was obvious, this nobility took shape, this deep mystery was only subterfuge. We had to open our eyes enough to understand that nature had so much to tell and to offer.

The universe is within sight, the stars twinkle but we don’t know for how long yet.