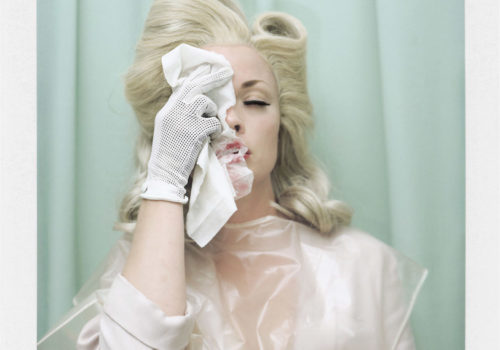 The Little Black Gallery presents Short Stories, the latest series by Anja Niemi. The show gathers 140 sheets of peel-apart Polaroids. For 12 months she worked solely with a 1970s Polaroid Press camera. In an effort to work on something that would be slow to make and time-consuming to look at, she produced around 500 Polaroids, and from them edited down and created eight short stories containing fictional characters, objects, landscapes and interiors – all in some way connected to each other.

Previously Niemi created a series based on an object without ever including the actual object. This time she starts off by photographing the content of the Beauty Counselor suitcase – that led to her series Darlene and Me in 2014. Then she created a new portrait of Darlene as the Beauty Counselor. The case filled with beauty samples from 1959 was the start of creating characters and stories based on objects.

The next image was of a bank deposit bag with the caption, This bag should be returned to Union Bank. The bag was clearly never returned and led her to create a story about the unlawful character named Mona. Whilst the chapter ‘Susan’ includes photographs of surgical instruments, a frozen lake, a set of acrylic teeth and a portrait of an ice skater. The stories start off in the same way all inspired by pre-owned objects. Rhinestone lashes, a police booking sheet with fingerprints, a Russian gun holster and six 1940s dolls with loose limbs, all led to a character and a chapter in her collection of tragicomic tales.
EXHIBITION
Short Stories
Anja Niemi
From May 26th to June 16, 2016
The Little Black Gallery
13A Park Walk, Chelsea
London SW10 0AJ
United Kingdom
http://www.thelittleblackgallery.com
http://www.anjaniemiphotography.com

London: Darlene & Me by Anja Niemi at The Little Black Gallery