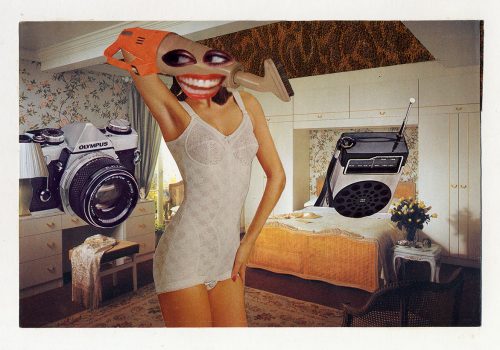 Kettle’s Yard presents the first UK survey exhibition of Linder (b. 1954). The exhibition will span five decades of the artist’s career and include new commissions. In a total takeover of Kettle’s Yard, ‘Linderism’ inhabits the galleries, the Kettle’s Yard House, the neighbouring St Peter’s Church, the Research Space, staircases and café.

The exhibition explores every area of Linder’s diverse practice, from her emergence in the Manchester punk scene of the 1970s to her more recent interventionist public commissions. The title ‘Linderism’ claims the artist’s work is its own art historical movement but also gestures to Linder’s interest in style, from the artistic to the fashionable.

Linder is well known for her radical feminist photomontage which cuts through the veneer of print culture. An important figure in the punk movement, she designed artwork for bands including Buzzcocks and Magazine, as well as for her own post-punk band Ludus, of which she was founder and lead singer. The exhibition will include examples of photomontage works from throughout her career. While early works comprise juxtapositions of images taken from contemporary interior, fashion and pornography magazines, the later photomontages collide different registers; including pin-up girls, figures from ballet annuals, roses from horticultural books and decadent gateaux from lifestyle magazines. If the earlier works, such as TV Sex (1976), expose the domestic consumerism of the 1970s, later works – usually made in series – are more complex meditations on representation, myth and belief. In works such as The Escort Series (2012) luscious roses over the heads of nude models convey beauty as a form of camouflage, while other pieces, combining fashion plates and interiors advertisements, stage metamorphoses where models physically merge with pieces of furniture.

The exhibition will be multi-sensory. As well as intervening in the café menu and front-of-house staff uniforms, Linder will recreate the pot pourri which Kettle’s Yard founder Howard Stanley ‘Jim’ Ede made for his home. Placed in the Kettle’s Yard House, this work will revivify the space. Linder will also invoke the presence of Ede’s wife Helen with a new sound installation in Helen’s bedroom, made in collaboration with musician Maxwell Sterling. Helen Ede left very little trace in the fabric of the Kettle’s Yard House and is called upon by Linder as a cipher for women’s material absence and mythic presence. Linder is creating a new photomontage for the exhibition using archival photographs of Helen and, in a further act of reclamation, has created a line of products under the title The House of Helen. The products include fabric squares, printed papers, cosmetic mirrors, pin badges, notebooks and scented candles. Available to buy at Kettle’s Yard, they will celebrate Linder’s commitment to uncovering women lost to history.

This concern with historical figures and research has been central to Linder’s work since the 1990s. This important aspect of her practice will also form part of the exhibition, including The Working Class Go to Paradise (2000–6), which focuses on an early proponent of the Quaker Church Mother, Ann Lee, and her more recent investigations into the artists Barbara Hepworth (The Ultimate Form, 2013–4) and Ithell Colqhoun (Children of the Mantic Stain, 2016). These performance works will be explored through documentation on display in the Research Space.

On 14 March 2020 Linder will stage a new iteration of her Bower of Bliss performances with a soundtrack by Maxwell Sterling at Murray Edwards College, University of Cambridge, the home of the New Hall Art Collection, the largest collection of art by women in Europe.