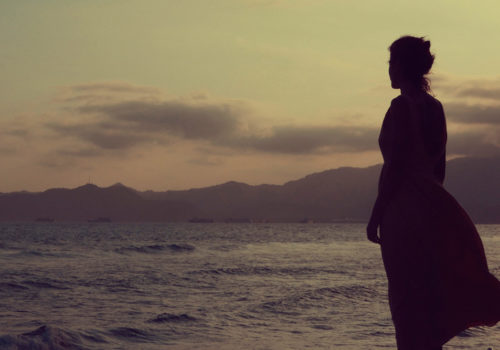 In FEU, Linda Tuloup mixes still images – advancing them one frame at a time and moving images that follow the same rhythm. There are also words in insert or voice-over. Here again, the director’s words alternate with those of her deceased father, to whom she keeps company on his last journey.

All this without pathos or egotistical maceration. Hence the strength of such a generous film which navigates between negative portraits, waves, foam, earth, sky and city. The image becomes burning. Between night and day that overlap. The road (a little). Love – perhaps the strongest. The wind, the wind, the wind.

And the modest evocation of a father, of the father. And these long-buried landmarks. Sometimes the music punctuates the silence of the one who comes, returns, remembers without pouring herself out. In the  red. And the white. And the body whose left side was suddenly hindered in this upstream return.

What shape to give the face of the disappeared? If not the surge and the fire. The one that was before the director. It remains in her, even after her. Hence this triple incarnation for a rebirth.

From the tense image of the daughter to the father, from one bank to the other, eternal love suddenly bursts forth beyond the begetting. Fire, the fire of fire and its troubling darkness. Let the image soothe where love cannot be exhausted. Hebrew death does not exist because life watches over such a visual elegy. The lover is drawn by the sea to the land – and vice versa.

Through such a film she soars. The first inaugural song remains, without the director being a hostage of melancholy, but the praying figure emerging from her chrysalis for an eternal return.
It is beautiful.