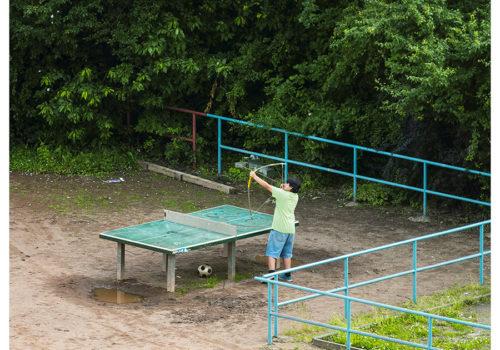 The exhibition Une ligne formée de points presents for the first time in France the work of Japanese photographer Tomiyasu Hayahisa, born in Chigasaki in 1982. Graduated in 2016, he became known two years later, with the publication of his book TTP published by MACK, quickly out of print and reprinted several times since.

For this series, he installed his camera on his windowsill and photographed the park located in front of his apartment, when he was studying in Germany. For five years, he tirelessly documented the life of a ping-pong table and its many uses over the seasons, which alternately served as a place to sunbathe or dry clothes, change the diaper of a baby, to stretch, to have a picnic or to brush a dog, but rarely to practice table tennis.

The exhibition brings together a large set of images of this ping-pong table, as well as two other lesser-known series, the first around a football goal and the second on a rhinoceros which turns in circles in a zoo. Composed from photographs of figures and numbers present in the public space, his ongoing slideshow, initiated in 2020 and still unpublished, completes the exhibition.

Tomiyasu Hayahisa has got into the habit of making sequences of images in the same place and without modifying the framing, and where only the different elements that pass through this frame are enough to create a narrative. It is in the mind of those who look at the images that the stories take on their full consistency. From simple and banal situations, he thinks his images as suites of stories that we discover little by little. The photographed moments add up, forming a whole whose meaning suddenly becomes clear.

Born in 1982 in Chigasaki, Tomiyasu Hayahisa first studied at the Tōkyō Kōgei Daigaku in Japan. He then moved to Germany to continue his studies at the Hochschule für Grafik und Buchkunst in Leipzig. Upon graduation, he became known in 2018 with the publication of his book TTP by MACK editions, quickly sold out and reprinted several times since.

He exhibited in particular at the Images Vevey festival in Switzerland in 2020 and participated the same year in the “ReGeneration 4” exhibition at the Musée de l’Élysée in Lausanne the same year.

“A line made up of dots” is his first monographic exhibition in France.