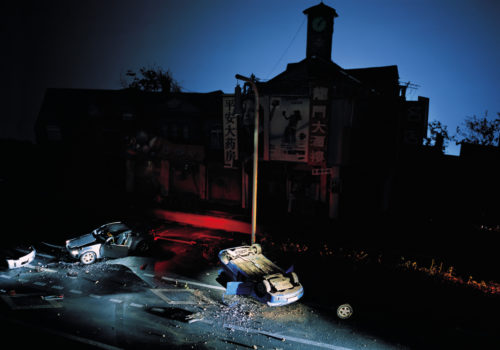 The 6th edition of the Lianzhou International Photo Festival will take place till the 26th of december. The theme choosen thise year by curator Fei Dawei is “Is the world real ?” The Festival gathers 70 exhibitions of young, not very well known, contemporary chinese photographers.

Political consciousness and commercialism, in order to achieve their propagandistic aims, have made full use of photography’s “objective” characteristics. On many occasions, photography has unobtrusively conveyed various ideological messages; in this respect its function surpasses that of slogans and written language. Nothing can lure us into a conceptual trap more easily than photography.

For a long time the field of photography in China was deeply influenced by pragmatism. Language was broken down into two parts, namely form and content, and only when the former “served” the latter could photography achieve legitimacy. Regardless of whether it was in the name of “correct” ideology or in the name of a “rebellion of language,” photographic works were functionally reduced to tools for conveying certain concepts. Thus photography became diagrammatic treatment of concepts; it became a means of incitement. Quality of expression was thrown aside, and photography became a servant, with no dignity of its own. And precisely in this sense, photography created an illusory screen between ourselves and the world.

The actuality of the world is called into question, because the world expressed through language is not reliable. The world we see through photography is a filtered world, a partial representation. After the invention of digital technology, photography lost even more of its identity as witness to the actual world. The world became a picture which could be altered at will, and photography became a tool which can be impinge toxically on awareness.

Thus the relation between the world’s existence and photographic language has become a paradox that needs to be worked out in current criticism of visual culture. Only the mouse that tied the bell around the cat’s neck can untie that bell. The problems brought about by photography can only be solved by reflectively approaching photographic language. Can photographic language break through the pitfalls that it itself has imposed? Can it bring forth the motivation to keep creating and making discoveries? Can it stir the imagination in broader ways? Can it become open-ended language which points toward expansive possibilities of meaning? Can its it be in alignment with the world rather than at odds with it? We have chosen the theme “Is the world real?” in hopes of displaying, through the works here, how these photographers have penetrated language in their own unique ways to re-constitute a freer, more intense, more meaningful world.