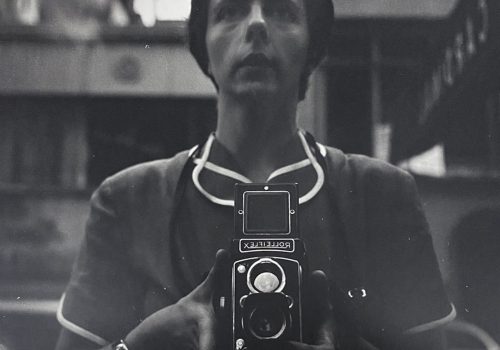 Les Douches la Galerie presents a new selection of self-portraits by Vivian Maier. Produced between 1953 and the 1970s, they once again demonstrate her eye for reflections, her great sense of composition and, more generally, the richness of her work.

Self-Portrait: My Impressions of Vivian Maier

“I have often wondered about the significance of capturing your own likeness, the experience   of being represented on both sides of the frame. I have to believe it is more than just vanity or narcissism. One would naively imagine a self-portrait informs us about the person. We observe the figure illustrated, and in the gaze back we believe we can determine something about their life, their work, their day. Searching for expression we discern clothes, choices, surroundings – all in an effort to resolve the mystery of self.

I am not sure if we can read the « self » in Vivian Maier’s self-portraiture or even chart the progression of her life through their images. We look at her self-portraits for revelations, but she does not really give us much. She is alone in her reflections. Her viewpoint difficult to judge. No hint of emotion or reaction. Never a portrait with a partner. She is seldom with a friend, occasionally with a child. The strength of Maier’s character is found in the persona looking back at us. There is little compromise; and ironically for such a private, autonomous person, her self-portraits are some of her strongest work thus far.

She seemed to embody photographic wisdom beyond her knowledge – always composing, rarely emoting. She sometimes made brilliant choices, sometimes she simply experimented. Reflective surfaces and glass permeate all of her work, the world fragmented as seen through frames, doorways, and boxes, her shadows projected into others’ lives, onto sidewalks, and the backs of strangers. We see her reflected in surfaces through her lens and back again onto those same planes at different angles.

No great emotion is expressed in these self-portraits, little drama, inquisitiveness rather than self- examination, composition over expressed emotion. Vivian smiled if she could, though rarely, and seemed to live two different lives: her contradictory domestic life and personal, creative life. She saw the world through a skillful eye, but never trusted anyone to bear witness or audience to her work. Deeply intuitive, it is easy to imagine in Maier a difficult person: odd, complex, living in her own head.” (…)

“I suppose Vivian was not interested in making portraits of herself as a whole but rather a glimpse or vantage of the many sides that coexisted in one body. I sense hidden clues in Maier’s self-portraits of her shadow. In some ancient civilizations, one’s shadow alludes to a doppelgänger. They are many here. Shadows on sidewalks, shadows crossing over windows, over newspaper headlines, over dried leaves where her heart should have been… Who is the real guardian of these images she never showed to anyone? (…)

“If I could interview Maier about her intent through her photographs I imagine this is what she would tell me. What drove me to have this secret life? My answer is, “Don’t even open that door.” In truth, I resisted it for a long time. Recently, I started to look closely at all of her work that has been released so far and fell into it, like discovering a message in a bottle thrown in the ocean over 50 years ago. I was swept away by her brilliance. She is astounding compositionally and the mystery surrounding her life story is deeply compelling. I believe in the end we cannot truly understand or know Maier

– but the potency of her images allow us an unveiled window into her covert world. The work sings with photographic purity, the love for physically making pictures. There is no place or use for a witness or collaborator, remaining uncluttered and free from the pursuits of acceptance, notoriety, and celebrity.

So often contemporary photographic work needs something…It demands an audience, or requires funding. It needs someone to like it, share it, or comment to it. Images today are not content to exist on their own, they constantly seek opinion and validation, gathering numbing, repetitive rhetoric along the way. Vivian Maier’s work is extraordinarily different in that it only needed to be made. What magic. A misfit genius.”

Piecing together Vivian Maier’s life can easily evoke Churchill’s famous quote about the vast land of Tsars and commissars that lay to the east. A person who fit the stereotypical European sensibilities of an independent liberated woman, accent and all, yet born in New York City. Someone who was intensely guarded and private, Vivian could be counted on to feistily preach her own very liberal worldview to anyone who cared to listen, or didn’t. Decidedly un materialistic, Vivian would come to amass a group of storage lockers stuffed to the brim with found items, art books, newspaper clippings, home films, as well as political tchotchkes and knick-knacks.

The story of this nanny who has now wowed the world with her photography, and who incidentally recorded some of the most interesting marvels and peculiarities of Urban America in the second half of the twentieth century is seemingly beyond belief.

An American of French and Austro-Hungarian extraction, Vivian bounced between Europe and the USA before coming back to New York City in 1951. Having picked up photography just two years earlier, she would comb the streets of the Big Apple refining her artistic craft. By 1956 Vivian left the East Coast for Chicago, where she’d spend most of the rest of her life working as a caregiver. In her leisure Vivian would shoot photos that she zealously hid from the eyes of others. Taking snapshots into the late 1990s, Maier would leave behind a body of work comprising over 100,000 negatives. Additionally Vivian’s passion for documenting extended to a series of homemade documentary films and audio recordings. Interesting bits of Americana, the demolition of historic landmarks for new development, the unseen lives of ethnics and the destitute, as well as some of Chicago’s most cherished sites were all meticulously catalogued by Vivian Maier.

A free spirit but also a proud soul, Vivian became poor and was ultimately saved by three of the children she had nannied earlier in her life. Fondly remembering Maier as a second mother, they pooled together to pay for an apartment and took the best of care for her. Unbeknownst to them, one of Vivian’s storage lockers was auctioned off due to delinquent payments. In those storage lockers lay the massive hoard of negatives Maier secretly stashed throughout her lifetime.

Maier’s massive body of work would come to light when in 2007 her work was discovered at a local thrift auction house on Chicago’s Northwest Side. From there, it would eventually impact the world over and change the life of the man who championed her work and brought it to the public eye, John Maloof.

Currently, Vivian Maier’s body of work is being archived and cataloged for the enjoyment of others and for future generations. John Maloof is at the core of this project after reconstructing most of the archive, having been previously dispersed to the various buyers attending that auction. Now, with roughly 90% of her archive reconstructed, Vivian’s work is part of a renaissance in interest in the art of Street Photography.

Regular hours: Wednesday to Saturday from 2pm to 7pm, or by appointment.