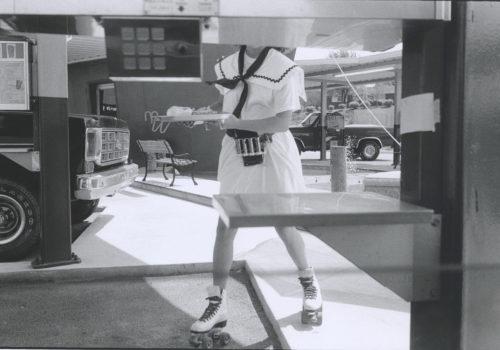 After Home in 2014, Les Douches la Galerie is devoting a new personal exhibition to the work of Tom Arndt. Accompanying the publication of the book Reflets d’Amérique by the atelier EXB, the exhibition brings together twenty-six photographs taken from 1970 to the present day, printed by the artist. Together, they tell the poetry of simple things in an America of big cities, suburbs and the rural world.

Since the mid-1960s, Tom Arndt has established himself as one of the major photographers who have captured the spirit and unique atmosphere of Minneapolis, the city where he was born in 1944. (…) His images of the city are part of the style of Street Photography. (…)

Tom Arndt, as a young photographer, was fully aware that he was living through one of the most turbulent post-war periods in the United States. A year earlier, in July 1967, Minneapolis was, in the wake of the national civil rights movement, the theater of race riots sparked by decades of police brutality against African Americans living in the northern neighborhoods of the town. Arndt was already using a Leica rangefinder camera at that time to document the evolution of many streets in Minneapolis during this period of great upheaval.

After completing a second cycle of photography studies at the University of Minnesota, Twin Cities, he perfected his knowledge with influential photographers and filmmakers, such as Jerome Liebling, Elaine Mayes and Alan Downs. Robert Frank, Yasuhiro Ishimoto and Bill Brandt, among others, also had a determining influence on the young photographer. (…)

Tom Arndt benefited greatly from the sustained development of the Minneapolis Institute of Art’s (Mia) photography collection and exhibition program initiated by the museum’s first photography curator, Ted Hartwell, whom he met during the second year of his second cycle of university studies. The dynamism of the museum in the field of photography owes much to the latter’s ambition, which benefited from the support of the city’s philanthropic community and, in the early days of his mandate, of his  friendship with John Szarkowski, director and Curator of the Photography Department at the Museum of Modern Art in New York (MoMA) from 1962 to 1991. Originally from Wisconsin, he worked as a staff photographer at the Walker Arts Center in Minneapolis before obtaining his position at MoMA. (…) John Szarkowski, who shared with Arndt the same fervor for photographing Minnesota, would play a decisive role in the career of the latter by acquiring his works, in the early 1980s, for the MoMA collection.

Of great formal complexity, the photographs of Minneapolis by Arndt often have as their subject the windows of stores in which the urban landscape and the constructions are reflected at the same time as the passers-by – sometimes including the photographer himself -, the whole provoking a kaleidoscopic effect. Another privileged theme of his visual observations, cars and trucks (essential means of locomotion in Minnesota), parked or circulating through the city and its outskirts.

Although also taken in Minneapolis, the photograph entitled 4th of July, Minneapolis (1976) offers a different image of the city. Tom Arndt captured three young African-Americans dressed in the fashions of the days sitting in the grass, in a relaxed attitude, waiting for the 4th of July celebrations in Powderhorn Park, in south Minneapolis. This park is located near where Tom Arndt grew up (and is about a mile and a half from George Floyd Square). The photographer, who frequented this place in his childhood, knows the neighborhood well. Arndt does not try to hide his presence from the people he immortalizes, and he often strikes up a conversation with them. He considers it essential that the people he photographs feel comfortable – a way of doing things that creates a certain form of intimacy between him and his subjects.

Thirty-six years later, during the spring and summer of 2020, Tom Arndt documented the destruction in Minneapolis following the police killing of George Floyd on May 27, 2020 in the city’s south – a neighborhood that the photographer knew well from having spent his childhood there.

Born in Minneapolis, Tom Arndt focused on photographing his native Minnesota. As part of the great tradition of American documentary photography, he gives us a family album: of its inhabitants, its streets, its shop windows, its coffee counters, its parks, its major popular events, with great empathy and great dignity. Misery has no place there. As his friend and writer, Garrison Keillor, points out, Tom Arndt photographs “the DNA of Minnesota culture, that is, the poor and outcast.”

Very attached to film, Arndt gives us prints of exceptional beauty. A lover of photographic papers, he cannot imagine a day without spending several hours in his dark room.