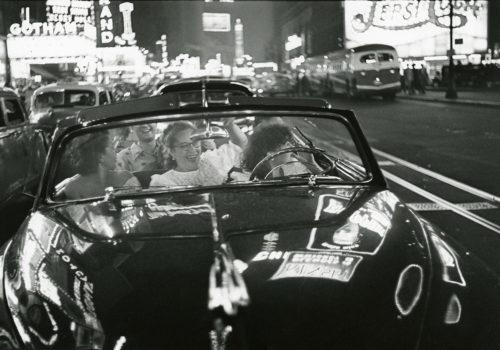 Les Douches la Galerie presents their first solo exhibition of Louis Faurer. An American photographer whose work remains largely confidential but who has left his mark on his contemporaries. Excelling in the hypnotic dusk light with his photographs of Time Square, Louis Faurer flourished in the 40s and 50s New York’s, photographing the city with its authentic characters dented by life.

My earliest experience in art occurred at the Benjamin Rush Public school in Philadelphia., Pennsylvania. Miss Duncan, who seemed to float on a rose petal scent, having requested that numbers be written on paper with lead pencil, was shocked when my sheet yielded a drawing of a locomotive. My next surprise, at the age of 13 arrived in the mail. I had submitted my drawings to Walt Disney and they proposed considering me for a position, although they couldn’t guarantee it, if I travelled to California. It seemed to be on the other side of the world and so I didn’t go.

After graduating from South Philadelphia. High School for Boys, I enrolled in a Commercial Lettering School. After months of hand trembling, I looked at my first sign, it read “FRESH FISH”. From 1934 to 1937 I sketched caricatures on the beach of Atlantic City, N.J. My interest in photography began in 1937. It was greatly intensified when I was awarded first prize in the Philadelphia Evening Public Ledger for the photo of the week contest. Soon, the Farm Security Administration’s early books became my bible. I was especially taken by Walker Evans’ photography. The world of Harper’s Bazaar also fascinated me.

Later, in New York, I was to meet Robert Frank at the Bazaar Studio. Since I was a commuter, he invited me to stay at his loft together with nine cats. He had recently arrived from Switzerland and was alone. New York enchanted and amazed me. Everywhere a new discovery awaited me. My pictures were rejected at the beginning, then U.S. Camera started publishing them. My work was being accepted, often it seemed unreal. I showed my photographs to Walker Evans. A beautiful brass kettle in his tiny room in the offices at FORTUNE projected his stability and eloquence. “You wouldn’t photograph fat women, would you?” he asked me. Later he warned me, “don’t become contaminated.” My need to continue photographing was solved by commercial photography. I worked for magazines which included Harper’s Bazaar.

1946 to 1951 were important years. I photographed almost daily and the hypnotic dusk light led me to Times Square. Several nights of photographing in that area and developing and printing in Robert Frank’s dark room became a way of life. He would say, “whatta town”, “whatta town”. I was represented in Edward Steichen’s IN AND OUT OF FOCUS exhibit. Then, work, work, and more work.“Boy,” he boomed, “go out and photograph and put the prints on my desk.” This command was synchronized with a pound of his fist on the glass top desk. I thought it miraculous, that the glass did not shatter.

I tasted and accepted the offerings of the 50s and 60s. LIFE, COWLES PUBLICATIONS, HEARST and CONDE NAST, enabled me to continue with my personal photography efforts. Often I would carry a 16mm motion picture camera and a Leica and photograph in the New York streets. The results were never shown commercially. The negative were stored.

In 1968, I needed new places, new faces and change. I tried Europe. I returned to the US in the mid- seventies and was overwhelmed by the change that had occurred here. I took to photographing the new New York with an enthusiasm almost equal to the beginning. After the Lunn purchase it was the world of the galleries. I was attracted again to drawing, that I had first practiced in my youth, and as if by a magic act, the photographer had become an artist! 1978 found me the recipient of the National Endowment for the Arts Grant and the Creative Public Service Grant for photography. The latter is known as (CAPS). My eyes search for people who are grateful for life, people who forgive and whose doubts have been removed, who understand the truth, whose enduring spirit is bathed by such piercing white light as to provide their present and future hope.

*Reproduced, with editorial revisions, from the artist’s original text.

Text published at the occasion of the exhibition Louis Faurer – Photographs from Philadelphia and New York 1937-1973 presented from March 10 to April 23, 1981 at the Art Gallery of University of Maryland.

Extracts from the book Louis Faurer published by Steidl