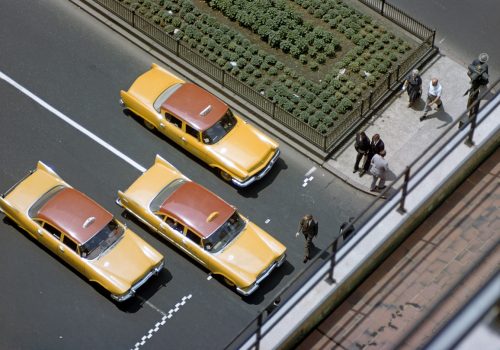 On the occasion of the release of the book New York in Color, 1952-1962 by Prestel Publishing, Les Douches la Galerie present a selection of prints, to be discovered from September 13th to October 31st, 2020.

On Sunday, October 13 from 1 to 7 pm, the gallery will welcome Alex Haas, son of the artist, for the sixth edition of Un dimanche à la galerie organized by the Comité Professionnel des Galeries d’Art.

My father loved New York. It was not only his home but also his muse, and this book is imbued with aspects of both. He would say that if there were a passport for New Yorkers, he would be the first to have one. Ernst had early success upon arriving there in 1951, which immediately gave him a sense of belonging. But his love of the city was not naive: he enjoyed its opportunities, sophistication, and its driving pace, but was equally aware of its harsher realities. It was that awareness that made him a New York photographer: one day he could be photographing Albert Einstein at Princeton University for Vogue, the next the last displaced persons arriving by boat at Ellis Island. It was during this time that he started experimenting with color photography in his city. These photographs would change the course of photographic history. A selection of them were published in 1953 in Life magazine in their first ever issue in color, and many are published here.

Ernst would often compare New York to Venice—a beautiful city on the verge of crumbling. Through the years, striving to support both his family and creative practice, he often struggled financially; the pressure of survival pushed him to work very hard. But he thrived under that pressure. New York pushed him. When a well-paying advertising job would come up, this would help finance his trips to the Himalayas or Japan, and he would return with a book project.

He chose the location of his large studio on 55th Street and 7th Avenue because it was two blocks from the Museum of Modern Art—where his work was often shown— as well as Carnegie Hall and Central Park. His studio was divided between the living quarters and the working area. The very large living room was filled floor-to-ceiling with hundreds of books, records, Tibetan masks, kachina dolls, South American pottery, Navajo rugs, Balinese paintings, and found objects from around the world. His giant bed was covered with a buffalo hide—much to the horror of his many girlfriends. All this created a pleasant potpourri of smells that you recognized the moment you walked in the front door: you had definitely entered Ernst Haas’s world.

The studio area was white but could be turned pitch black to accommodate for projections. It had dozens of filing cabinets, containing all of his transparencies, negatives, and correspondences with old friends from Robert Capa to Henri Cartier Bresson, all well organized by his longtime assistants Marilyn Schroeder, Todd Weinstein, and Marina Ospina. On top of the cabinets were a series of light tables where he would spend hours hunched over with a loop over one eye, working way into the night, when the city was quieter. With the air conditioning set to Alpine temperatures, it was always freezing in there like in his native Austria.

One night, after a long day of work, he asked me to assist him photograph in the neighborhood. It must have been around midnight. And this was in the late 1970s, when crime was rampant. We went out with all of his expensive Leica equipment, setting up for a shot. Ernst was so focused and excited about what he was doing that he was oblivious to the fact that a group of gentlemen, who seemed very interested in the equipment, suddenly surrounded us. Upon seeing them, my father—without hesitation or understanding of the gravity of the situation—asked one of them to look through the viewfinder, explaining the technical aspects of what he was doing. He then invited the next one to take a look, and so on. They walked away. I used to remind him of this story, of which he had no recollection.

My sister Victoria and I were born in New York City. My first memory of seeing, or rather feeling, New York was coming back from Switzerland around the age of 5. I was sitting in the backseat of a checker cab, sandwiched between my father and sister, approaching an August evening skyline with the clicking of the taxi meter keeping time. As we approached, there were giant billboards of cowboys along the highway with my father’s photographs that he had taken for Marlboro. It felt as if we owned the city. Once we crossed the bridge from Queens into Manhattan everything became more intense: the heat, the noise, the crowds of people. We were now in the belly of a beast that we also called home. Inside the beast, you no longer saw the buildings, instead they saw you. When we arrived at 853 7th Avenue, we were greeted by the doormen—who were practically extended family. The studio was across the street from the Carnegie Deli. My father always took us there for our first meal back home. Very different from Swiss food.

One of my most cherished memories was opening the refrigerator to find it jam-packed— row upon row of orange boxes of Kodachrome film. Not an ounce of food to be found. There was no doubt what my father did for a living.

Ernst Haas (1921–1986) is acclaimed as one of the most celebrated and influential photographers of the 20th century and considered one of the pioneers of color photography. Haas was born in Vienna in 1921, and took up photography after the war. His early work on Austrian prisoners of war returning home, brought him to the attention of Life magazine. He declined a job offer as staff photographer in order to keep his independence. At the invitation of Robert Capa, Haas joined Magnum in 1949, developing close associations with Capa, Henri Cartier-Bresson, and Werner Bishof.

Haas moved to the United States in 1951 and soon after, began experimenting with Kodachrome color film. He went on to become the premier color photographer of the 1950s. In 1953 Life magazine published his groundbreaking 24-page color photo essay on New York City. This was the first time such a large color photo feature was published by Life. In 1962 a retrospective of his work was the first color photography exhibition held at New York’s Museum of Modern Art.

Throughout his career, Haas traveled extensively, photographing for Life, Vogue, and Look, to name a few of many influential publications. He authored four books during his lifetime: The Creation (1971), In America (1975), In Germany (1976), and Himalayan Pilgrimage (1978).

Ernst Haas received the Hasselblad award in 1986, the year of his death. Haas has continued to be the subject of museum exhibitions and publications such as Ernst Haas, Color Photography (1989), Ernst Haas in Black and White (1992), and Color Correction (2011).