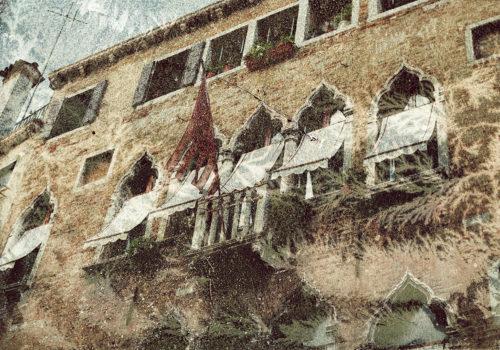 For the second edition of the Les Docs de Noirmoutier festival, the Salorges cultural center will host the photographic and documentary exhibition “Solastalgia” by Marina Vitaglione.

With this docufiction entitled Solastalgia, Marina Vitaglione imagines a story in which the lagoon city chronicles its own disappearance.

Venice, the European city most threatened by climate change, is seeing its foundations and fragile buildings slowly eroded and damaged by water, due to the rise of the sea level; its floors are subsiding due to maritime pollution caused by large cruise ships.

There is the desire not to forget anything, but while photography allows us to reinvest our history, it is in the attempt to write it that Marina Vitaglione exposes us to a form of confrontation with the limits of the photographic possible. The materiality of the image becomes central. The photographic accidents caused by the artist by immersing her negatives in the sea water of the Adriatic underline the danger of shaping the memory fixed in a medium. The perishability of the recording medium comes into play. The distortion, the film chemistry lead to the imaginary of an  attack, of destruction. It is no longer just Venice that disappears, in a way the film itself fades away and abandons part of what it had begun to memorize. And the images themselves carry the future mark of disappearance.

A story of speculative anticipation featuring the trace of a moment whose importance Man has not yet grasped, the artist creates a projective memory playing on the confusion of temporal spaces. Venice, already deserted by its inhabitants and slowly submerged under water, challenges us and invites us to question ourselves about this critical ecological situation from which Noirmoutier itself will not escape, to reflect on the way in which we cross the places we go thru.

Opening and discussion in the presence of the artist on Wednesday September 7th from 6:30 p.m. to 7:30 p.m.