Off the beaten track with Raymond Depardon 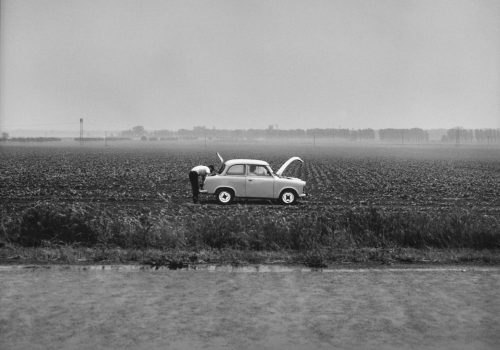 By emphasizing Raymon Depardon’s meandering itinerary, the Fondation Henri Cartier-Bresson pays a special tribute to the photographer with a book publication and an exhibition. From his family farm to the African desert, the exhibition follows the gaze that traverses his entire oeuvre.

Straying off the beaten track, crossing the lines, picking a side road, cutting across a field to reap an unexpected harvest … Raymond Depardon freely admits: he loves taking the time to break open the frame, to expand the view.

This is evidenced for example in his photographs of the blind in Saigon, Vietnam. “It was in 1973, and the war was still going on in the country. I had no desire to climb into an American helicopter and take the same old war photos. I wanted to broaden the scope of Vietnam photographs. And then I stumbled across the following scene: people who had recently lost their sight, blinded by napalm, were learning to cross the street [traverser la rue].”

Traverser — this is precisely the title chosen by the exhibition curator and foundation director Agnès Sire who has gingerly selected the photographs shown in the exhibition. All images correspond to the photographer’s gesture of “crossing,” “traversing”: “an action verb, like walking, moving forward,” he says before cracking a joke: “we needed a word that would make me look alive!”

This impression of movement can be felt throughout all the works on display. From his family farm — the Garet farm — to the far ends of Africa, we find the footprints of a photographer who clears an uncertain path through the labyrinth of the world. We can sense the difficulty with which Depardon finds the right distance and frames the shot. He sums up this delicate task as follows: “What is missing in photography is what’s outside the image field, the hors-champ: this is my biggest gripe about photography. The frame is the image field. That is to say, it is the opposite of hors-champ. Framing implies selecting. One takes sides, cuts, leaves something out.”

The result is photographs that make that tension palpable. There is always a taste for certain emptiness, for certain immensity and a taste for traces. In Beirut, for example, Raymond Depardon immortalized walls gutted by gunfire, rubble pulverized by bombs. These photographs aptly correspond with images showing the desert expanses of certain regions in Africa and those expressive of pain, which is one of the four themes selected by Agnès Sire for the exhibition. Pain caused by war. The pain of the starving people whom the photographer encountered in Rwanda. The pain of his own parents who knew that none of their children would farm the family land and who wondered, with tenderness, what remote ancestor’s blood is coursing through the veins of their son, with his strange passion for photographing the world. This is also the aesthetics of the desert, which is far from absent from confined spaces.

In Italy, in the 1980s, Depardon went inside several psychiatric hospitals — which, by the way, attracted the attention of his friend, the photographer Josef Koudelka. In Arezzo, Naples, Turin, he photographed those souls who are a bit out of balance and whose minds waver. He captured writhing bodies, squinting eyes, and games that hold no meaning for anyone except for the madman who is thus burdened with his solitude. Depardon had to stop one day because, he said, he was no longer afraid. He added, “it was becoming dangerous.”

It is dangerous to no longer be afraid to photograph as if the act of inscribing onto the surface of film took on the form of necessary risk-taking where the photographer engages his mind as well as his body and must be on permanent alert. “My life has always been a quest for a suitable place. It’s not just ‘who am I?’ that I’m after in photography, but above all, ‘where do I come from?,’” explained Raymond Depardon. “That’s what wandering is about, realizing that one belongs a bit everywhere and nowhere at the same time. That one’s home is where one is at the present moment.”

The photographer has thus always felt particularly at ease in the most difficult terrain, like in Africa, for example. He also draws parallels between places of his childhood when he noticed for instance that Tubu camel breeders in northern Chad share concerns similar to his father’s, a farmer in Villefranche-sur-Soâne. His country roots often come to the surface—those very roots he credits with paternity in his oeuvre.

Somewhat timid, his approach is always calm and slow; it is also precious because it is discreet and full of humanity. This is true, for example, of the photographs he took of prison life. In one of them, we can see a man pacing around the yard of the Clairvaux prison in 1998. His path is so well trodden that an actual circle has been formed on the ground, and the photograph suddenly seems to resonate with thousands of footsteps made by thousands of prisoners stamping the soil. The elegance of a wide frame and an evocative subject: to bring into being, through a singular presence, thousands of others …

No less evocative is the photograph that closes the exhibition and is shown apart from the rest. It’s a sort of a self-portrait. It shows two switches. The lower one is covered with scotch tape and seems to be out of order. It is labeled, “door.” The other, located above, is labeled “light.” A ray of natural light comes in at an angle and rests on the upper switch. “I remember that morning well. There was beautiful sunlight that created a rather oriental effect, the sort of light that spurs one to travel,” said Raymond Depardon, confiding that he took that photo in the stairwell of his apartment building. “This is what works really well in photography, that’s when it reveals to you who you are. It puts you outside, out in the world, and compels you to walk.”