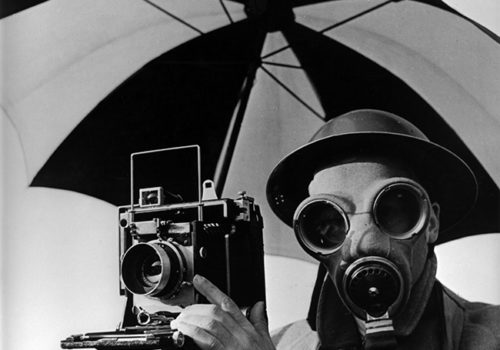 “I’d rather take a photograph than be one” – Lee Miller

“Lee Miller Surrealista” includes more than one hundred photographs, the most iconic and celebrated images from her all artistic carreer: the stay in Paris, the Studio in New York, the period between Egypt and Europe before the Second World War, her carreer as a war correspondant with the US Army, and her latest years.

Discovered by Condé Nast, Lee Miller became a stunning model since her face appeared on the cover of a “Vogue” issue, and a number of photographers such as Edward Steichen, George Hoyningen-Huene, Nickolas Muray, and Arnold Genthe wanted to portray her.

After a few years, she decided to move to the other side of the camera. In 1929 she moved to Paris to work with the well-known artist and photographer Man Ray. She became Man Ray’s model and muse, and that led to a strong artistic collaboration between the two. Together, they took some of the most beautiful shots of the period and made important technical developments in photography such us the artistic application of the Sabattier effect.

She was also friends with Picasso, Ernst, Cocteau, Miró and the rest of the artists of the Surrealist group.

Thanks to her success she was able to open a studio in Montparnasse in 1930 which became popular among rich international customers, artists, stylists, and magazine editors who collaborated with Lee for commercial photographs. There is no doubt that Lee’s surrealist images are the most important part of Lee’s artworks of to this period, though.

Despite the hard times for the American economy due to the Wall Street crash in 1929, Lee Miller came back to New York to open a new photo studio in 1932.

After 2 years, the ever-unpredictable Lee decided to close her successful photo studio in New York and to moved to Cairo to live a romance with Egyptian businessman Aziz Eloui Bey, her husband.

During that time Lee took long journeys in the desert and shot the villages and ruins with a surrealist eye, something that went on also during her trips to Europe with Roland Penrose, a surrealist artist who became her second husband.

Lee left Egypt with the intention of undertaking a long journey with Roland Penrose, but their plans fell apart when Hitler invaded Poland. They went back to London, where Lee worked as a photographer for “Vogue”. During the period of the air raids, Lee Miller began working on the successful book ‘Grim Glory. Pictures of Britain under fire’ to show the American public the suffering experienced by the British population due to the constant bombing.

In 1944 she became a correspondent accredited to the US Army, and teamed up with ‘Time’ and ‘Life’ photographer David E. Scherman. She followed the US troops overseas only a few weeks after the D Day. She was probably the only woman combat photo-journalist to cover the front line war in Europe and among her many exploits she witnessed the siege of St Malo, the Liberation of Paris, the fighting in Luxembourg and Alsace, the Russian/American link up at Torgau, the liberation of Buchenwald and Dachau. She billeted in both Hitler and Eva Brauns houses in Munich, where one of her most well-known photographs depicting Lee Miller was taken. In this shot, Lee is naked in the bathtub that once belonged to the Führer. This pictures was  followed by the  photoshoot that documented the attack of the impregnable chalet that belonged to Hitler at Berchtesgaden in flames on the eve of Germanys surrender. Penetrating deep into Eastern Europe, she covered harrowing scenes of children dying in Vienna, peasant life in post war Hungary and finally the execution of Prime Minister Lazlo Bardossy.

After the war she continued to contribute to Vogue for a further two years, covering fashion and celebrities, but the effects of the war years were now evident. She suffered from a severe PTSD. The times when Lee would shoot profound photographs were long gone, although she contributed to Penrose’s biographies of Picasso, Miró, Man Ray and Tàpies.