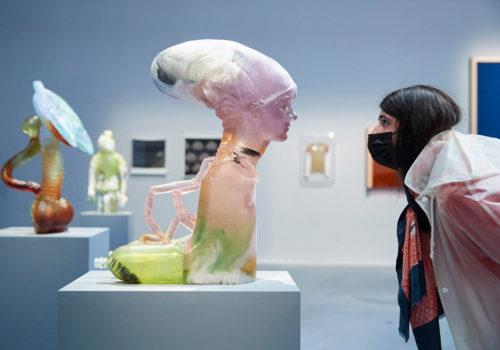 The exhibition has been over for a month but we would like to present to you some images. It was held at the Lee Marks Fine Art Gallery and was titled: The Venice Biennalists.
The photographer: Gus Powell.
And here are his few words:

For much of my career, I have photographed people experiencing art. This practice began when I was assigned to make pictures for The New Yorker’s Goings On About Town section and Peter Schjeldahl’s art reviews, and has grown to include commissioned work for The Met, MoMA, and Bloomberg Philanthropy. In each instance I have tried to approach the task with the sensibilities of a “street photographer.” It is not so much about describing the work as it is about taking pleasure in how people approach, read, spend time with, and move on from an encounter with a work of art. It is also about the surprises that happen in these spaces: the rhymes of gesture and color between art and visitor, and the visitors who become more interesting than the art.

In 2021, we chose to try living a different life in a different city and moved our family to Venice. As the Biennale approached, I reached out to publications I had worked with in the past and ended up covering the opening events for The New York Times and Aperture. While there were very specific requests from the editors I was working with, there was also the possibility to record the works and the visitors in the Biennale (“The Biennalists”) in my own way. The preview was more packed than it had been for many years, and while most Biennalists pushed through at high speed, cell phones in hand, some in golf carts, there were still those that really looked, that stayed with pieces, stared them down, and even touched them.