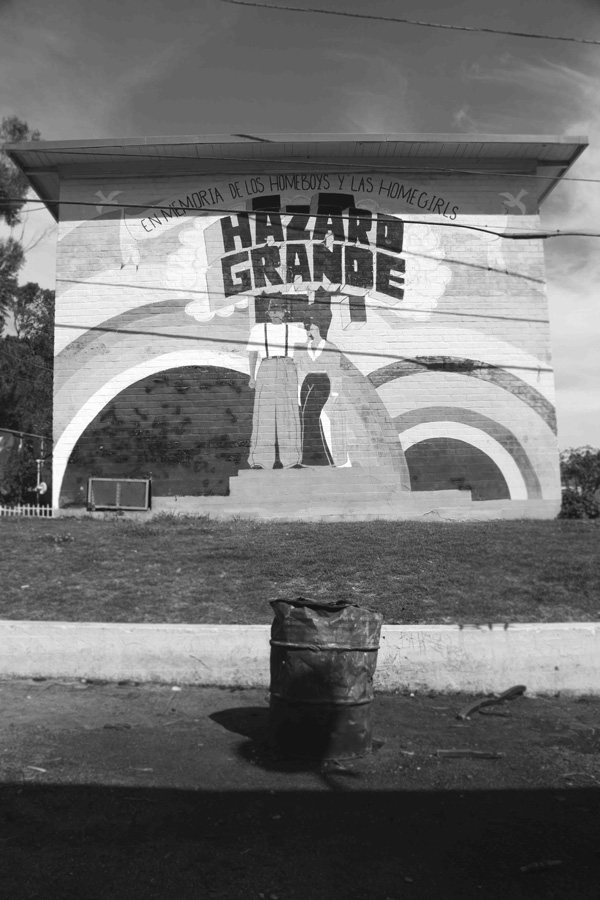 In February of 2011, I went with a LA friend to visit Ramona Gardens (Los Angeles, CA), a surreal place where the past seems to not leave. While being shown around the neighborhood by the locals, we realized this place has been a battlefield… every 30 feet or so our resident guides would point out who has died on which sidewalk, and they explained in detail the pain portrayed in paint on the intricate wall murals – most of them illustrate battles between police and Ramona Gardens residents, tragic shootouts and deaths. Ramona has been for a very long time one of the most dangerous neighborhoods in the world.

In the photos I took that day with the permission of the elders of Big Hazard/Ramona Gardens, I portray their neighborhood, their murals, the places they hang out, their drawings, some faces and flavor of local Big Hazard members, and the new generation coming up. It was like seeing history repeating itself – some accepting the turbulent lifestyle as a given, as a path that deserves no thought but to follow the path. In many ways the sense of violent history, the war between locals and police, the feeling of abandonment and neglect by outside society is very present.

We spent a while there talking to local residents of all ages, photographing and walking around with these regular people who happen to have a vast difference in perception and life experiences than I have. I was allowed a rare insider’s view, to participate and engage with them, seeing in a few hours what their day looks like and a taste of what it feels to live in the Gardens.

As you go down the street a series of codes are to be respected: car windows down, you do not drive in slow motion… these can prompt fast mistrust and fear that you could be a potential shooting car passing by. We parked on the wrong side of the street, this indicates non-obedience to the law – these little details show respect for the locals in order to be able to peek into their world.

At core, and like in any of the many places I have been around the world, the Big Hazard members are just people, many just good people at core, totally grabbed into a way of thinking that they were surrounded by since childhood, an outlook on life which any human being would have a hard time cutting ties to since this gang culture was the way of the world they saw while growing up. It’s easy to see why they still live in such a tight big family, Big Hazard as they call themselves.

In some of these visuals you will see “made” members, the only ones allowed to have and display tatoos on their heads – these are the leaders; you’ll see the younger ones looking for a spot of honor, and the elder members alike. The murals illustrate their paths: virgins, history, celebration, death of family members. One of my favorite visuals (although the most shocking) is of our improvised guide who showed us around and introduced us as “they’re cool” to the people we ran into – in the photo he is lighting up a smokeball, what they call “smoking a cold one”, in which they dip their smoke into PCP which creates a cloud of fire and smoke, the shocking part is the PCP (embalming fluid) and the relation of “smoking a cold one”… a reminder of the delicate balance between life and mortality for Big Hazard members in Ramona Gardens.